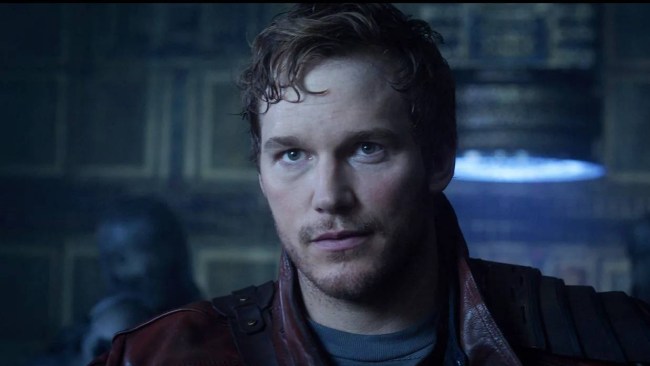 Remember that insane Marvel Cinematic Universe fan theory that Captain America is Star-Lord’s grandfather that we shared with you a week or so ago?

The TL;DR version of it went like this: “Captain America is Star Lord’s Grandpa because the actress who plays Meredith Quill has a part in Captain America: The First Avenger where it’s implied something happens with her and Cap. Fast forward to Guardians of the Galaxy Vol. 2 where Peter is the only offspring of Egos’ millions of kids to have the inner light. Plus timeline matches up pretty perfectly.”

That would be pretty freaking amazing if true, right? What would make it even weirder is that both actors who play these guys are named Chris, play superheroes, and their favorite NFL teams met in the Super Bowl just a few years back. But I digress.

Anyway, I hate to break it to you, but Guardians of the Galaxy director James Gunn is here to pee in your Wheaties.

Not only that, but it was his first tweet in over a month for the usually loquacious filmmaker he thought it so important.

“Sorry to bust this fun theory,” Gunn tweeted, “but it doesn’t work as Meredith Quill’s father is a major character played by @GreggHenry88 in Guardians of the Galaxy Vol 1 and appears briefly in Vol 2.”

Sorry to bust this fun theory, but it doesn't work as Meredith Quill's father is a major character played by @GreggHenry88 in Guardians of the Galaxy Vol 1 and appears briefly in Vol 2. https://t.co/5Jgshez3Np

Way to “cool story, bro” us there, Jimmy.

Gunn, who is currently filming The Suicide Squad reboot(?), is the one person out there who would know, right? After all, once he’s done with DC and Suicide Squad he’ll be back, after much hand-wringing, to direct Marvel’s Guardians of the Galaxy Vol. 3.

Also, as one astute Twittererrr commented…

How much would it suck if that was the case? How small does it make the universe to tie every character together so that it seems like it's just some tiny group of inbred hillbillies?