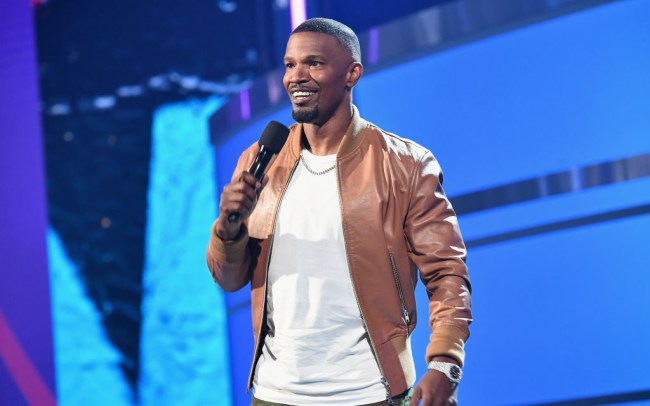 Jamie Foxx is returning to stand-up comedy this year after decades of focusing on his acting and music career. Another hilarious comedian who is also returning to standup in 2020 is Eddie Murphy, and Foxx wants to go on a comedy tour with Eddie.

Foxx appeared on The Ellen Show last week to promote his new movie Just Mercy that also stars Michael B. Jordan and Brie Larson. Foxx announced that he is returning to stand-up and starting at the smaller clubs where he first broke into comedy.

Foxx’s new comedy routine will feature “some storytelling.” “There’s some stories of the first time I met Kanye [West],” Foxx said. “I got stories being on Django, things like that. So, I wanna take you on a little bit of an adventure.”

Foxx also promised his shows will have “super-duper jokes,” and he’s going to do impressions of celebrities such as Jay-Z and Dwayne “The Rock” Johnson.

Ellen asked Jamie if he would go on a comedy tour with Eddie Murphy, who is also making a standup comeback.

This makes perfect sense for these two comedy greats to tour together because their careers are so similar. Both started their careers in stand-up comedy, both appeared on successful sketch comedy TV series (Eddie on SNL and Jamie on In Living Color), both transitioned into being Hollywood actors, both have released music (Foxx a little more well-received than Murphy), and both are making a return to stand-up comedy in 2020.

RELATED: Eddie Murphy Says He ‘Never Stopped’ Making Music And Has A Vault Of Unreleased Songs

Foxx also revealed his fitness goals for 2020 while on the daytime talk show. The 52-year-old actor admitted that he only keeps his upper body in shape and skips every leg day.

“2020 I got to do legs, I don’t ever do legs. Because you know brothers don’t do legs,” he told Ellen DeGeneres. “No, no, no. We’re big at the top but sort of small at the bottom. Like I could beat you up, but I can’t chase you. I don’t see a lot of black guys doing legs.”

Foxx explained that he attempted to do legs once last year, and it failed miserably.

“I took one of those female squat classes, a butt burn, where y’all are just all day [squatting], and I couldn’t,” Foxx said. “I don’t have calves. I think that’s part of my heritage. Meaning from Africa, we have smaller calves. I’m African-American: I’m American up here and I’m African down here.”