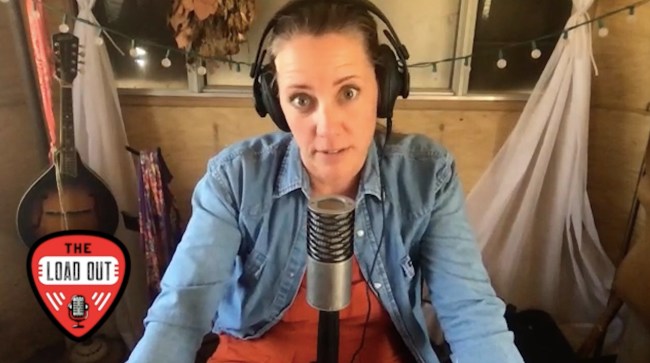 Despite being surrounded by the music of countless great female country singers growing up – Lorrie Morgan, Reba McEntire, Patty Loveless, Dolly Parton and others – Jamie Lin Wilson did not see herself pursuing a career in music.

As she noted to me on the latest episode of The Load Out Music Podcast, there were “so many great, strong female artists that I really latched onto.” Yet, the fame that often accompanies playing music in front of thousands was a deterrent.

“I would love to be a singer but don’t want to be famous,” Jamie Lin Wilson said. “I’m good at math so I’ll become an engineer.”

That was the thinking and thus the path she found herself on – working towards an engineering degree at Texas A&M.

Then came that one week when she was 19. Wilson went to see The Dixie Chicks (now The Chicks) and lead singer Natalie Maines took time to play a solo acoustic version of “Cold Day In July.” Wilson thought to herself, “Hey, I could probably do that.” Later in the week, she went to the Cow Hop bar where she caught Susan Gibson, who ironically wrote “Wide Open Spaces” – a huge hit for the Chicks.

Wilson was hooked. The math-nerd engineer was now going to be a singer-songwriter. But her long and winding music industry journey has since been anything but conventional.

The Sealy, Texas-native cut her teeth playing open mic nights in College Station, then joining the local band the Sidehill Gougers. She eventually left the Gougers and was put together with an all-female group that became The Trishas. They built unique chemistry, transforming from a collection of singers and players into an actual band. They ultimately found themselves opening up for the likes of Todd Snider and the Nitty Gritty Dirt Band as well as touring the country with infant babies in tow.

Despite their success, however, The Trishas collectively made the choice to disband. They had their own priorities, and in Wilson’s case, it revolved around life raising a family with husband Roy while playing music on her own terms.

Yes, she wanted to tour and make records. But needed to do things like coach her daughter’s softball team and “stay married.”

In addition to the numerous three-named Texas singers, these are among the many topics we dive into on the latest episode of season three of The Load Out Music Podcast. At the end of our conversation, it was clear that what’s most important to Wilson is being present for her family despite making a living as a touring musician, while remaining true to herself, her values and her rural roots.

“I am on my own timeline,” she told me. “I’m a small town. I’m sitting in a ‘60s trailer next to a dog pen next to my husband’s shop. I tell stories of people who are rural.”