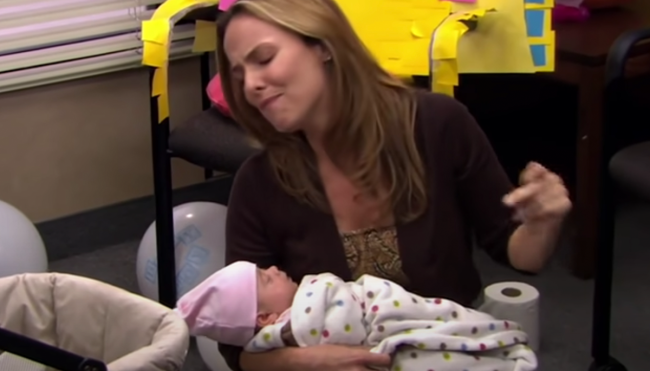 There aren’t many television shows that have managed to master the art of cringe comedy quite like The Office thanks largely to Michael Scott’s impressive ability to routinely find himself in situations that would make most people want to self-exile to an island in the South Pacific and never return to society again.

I think most fans of The Office would agree that there isn’t a single episode that’s capable of making you physically uncomfortable quite like the infamous “Scott’s Tots,” but I’d argue season four’s “Dinner Party” takes the silver medal thanks to its ability to capture the palatable awkwardness of spending an evening with a couple who lets everything come out after drinking too much wine.

That fateful evening would mark the end of their relationship. However, the two would be reunited at the end of that season after running into each other outside of a grocery store, where Michael is elated to hear Jan is pregnant and slightly less elated to hear a random donor at the sperm bank is actually the father.

We never learned the identity of the man who provided the seed for the unfortunately-named Astrid, but according to Mashable, that is no longer the case. On the most recent episode of Office Ladies, former cast member Angela Kinsey said that in the original script for the above sit-down, Jan revealed the name of her baby daddy, who was none other than…Andy Roddick:

“Jan says: ‘You have to pay top dollar, but it’s worth it. Now, here’s the best part. I got Andy Roddick’s sperm. Jan looks to Michael like she’s expecting him to be very impressed. And Michael says, ‘The tennis player?’

Jan says, ‘Well, it’s a little more than that. He’s the sixth-ranked player in the world and he’s won four grand slams.’ Michael says, ‘That’s a lot of grand slams, I guess.’ Jan says, ‘And he’s a humanitarian; something with orphans.’

Michael is quiet and Jan goes, ‘Michael?’ And Michael says, ‘Can I just sit here for a minute without more things coming into my head?'”

According to Jenna Fischer, Roddick was boys with Rainn Wilson (for reasons I would love to know) and visited the set on at least one occasion, so it would appear that played a role in why he was the donor of choice.