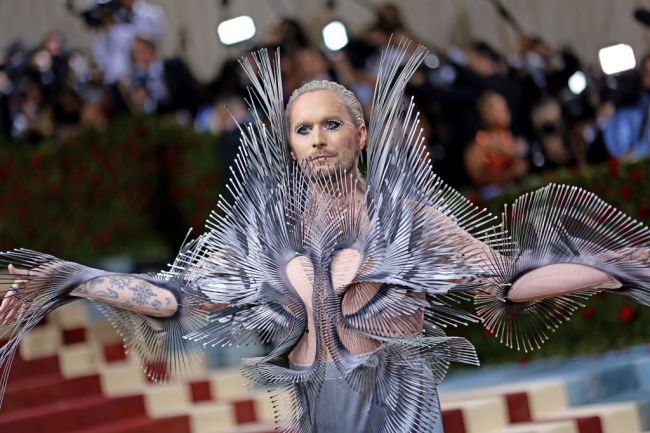 As I’ve written about quite a few times on this here website, the way Jared Leto acts — go ahead and Google “Jared Leto” cult real quick — is nowhere near acceptable relative to his level of acting talent. If Denzel Washington and Daniel Day-Lewis and Leonardo DiCaprio don’t act like that, why should Leto? And don’t even get me started on his portrayal of Joker.

Lately, though — as a result of his performances in House of Gucci and Morbius (the first movie to sell one Morbillion tickets, to be fair) — the culture seems to be getting wise to Leto’s act, as evidenced by the fact that someone showed up to the Met Gala on Monday night in an outfit so absurd that people simply assumed it was Leto. It wasn’t. It’s actually Fredrik Robertsson, who’s a Swedish fashion designer, or influencer, or something. That really isn’t the point.

tagging jared leto in this is crazy 💀💀 pic.twitter.com/uhJFD2C0eV

If they leave this up for long enough, this man legally becomes Jared Leto https://t.co/bdcwtiJAys

Is this JARED LETO? Who wore this in the 1870s? pic.twitter.com/yo4tEhWzOr

Jared Leto at Vow of the Disciple pic.twitter.com/242PzVGRQF

Imagine putting this much effort into your look only to get misidentified as Jared Leto. The indignity. https://t.co/d1EyLRNAgQ

IT IS NOT JARED LETO, IT IS THIS RANDO, HOW MORTIFYING https://t.co/TRt1fDF15l pic.twitter.com/cF6O6c8yrT

with this look jared leto asks us, “what if bjork sucked?” pic.twitter.com/UJgFyLQJJI

“My look was inspired by that apartment building with the eyelashes across from the Target on Santa Monica Blvd.”

Spot the real Jared Leto.
Is it A, B, C or D? pic.twitter.com/npLV5jT0Pq

this man jared leto thought the gilded age was in 2007 with this homage to the windows media player. #MetGala pic.twitter.com/vYVTqBr4Pn

Don’t worry, everyone (sarcasm): Leto did show up pulling a predictably Letoian stunt:

RELATED: Jared Leto Went So Method He Limped To The Bathroom, Took So Long It Caused Production Delays On ‘Morbius’