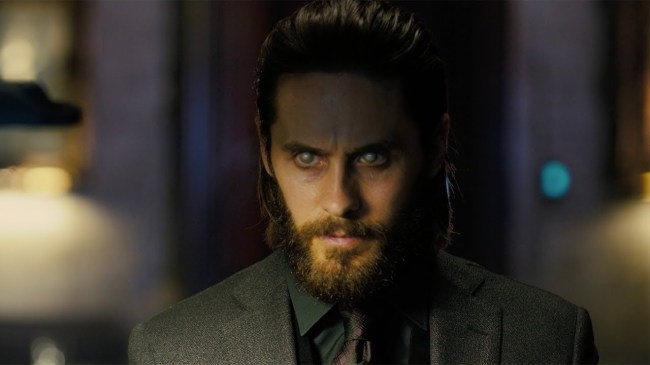 Jared Leto, man, this dude is making it so easy to dunk on him at this point that it’s almost not even enjoyable anymore. Making fun of a douchey celebrity is one thing, but now I sort of just feel like I’m bullying the guy. On our new pop culture podcast, we’re looking back at all the DCEU films, and we named the award for bad acting after him.

But now we’re reaching a breaking point, as making fun of Jared Leto has become akin to picking on a short guy for his height — just doesn’t sit right with me. He’s certainly making it difficult to abstain, though, as the worst-ever on-screen Joker took to Twitter yesterday to announced his role in the new Tron movie and accidentally revealed the film’s title in the process.

Did Jared Leto accidentally confirm the Tron Ares title and then delete the tweet? 🤔 pic.twitter.com/QOcP5N9fNB

That’s right, in the cursed year that is 2020, Leto pulled ye ‘ole Tweet n’ Delete, which — as we all know — is far worse than simply letting your mistake live on the internet forever. While I’m willing to give Leto the benefit of the doubt that the studio likely had him pull the tweet down, the fact remains that once something lives online for a second, it lives forever: the cat’s out of the bag and everyone knows the next Tron movie will be titled Tron: Ares. Unless, of course, they now decide to change it.

I am so very excited and proud to confirm that YES – I will be starring in TRON.

We will work as hard as we possibly can to create something that I hope you all will love.

We have some very special ideas in store for you all…🤗

As for said Tron film, the movie — which is set to be directed by Garth Davis (Lion) — will be the third in the franchise, following the Jeff Bridges-starring original in 1982 and the 2010 sequel, Tron: Legacy. At this time, it is unclear if the upcoming Jared Leto iteration will be a direct sequel to the previous two films.

If you find yourself curious about the Tron franchise, both the original and the 2010 sequel are currently streaming on Disney+.