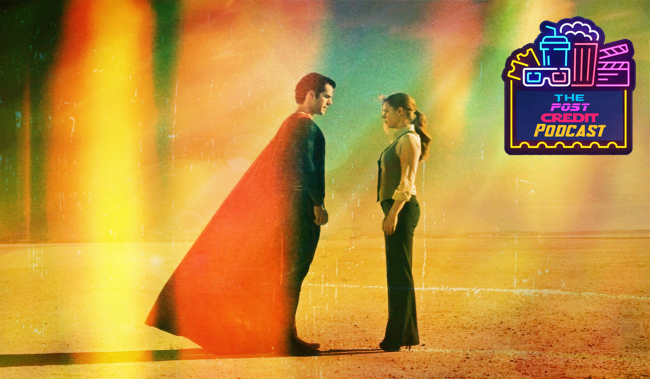 The DCFanDome Event — which will go live for just 24 hours on Saturday, August 22  — is set to help usher in a new era of DC Comics filmmaking, as Warner Bros. and DC have promised that the massive online fan event will feature be news about, trailers for, and footage from their upcoming slate of films, such as Wonder Woman 1984, The Suicide Squad, The Batman, Zack Snyder’s Justice League, *maybe* even Black Adam and The Flash.

With the DCEU set to take its next big step forward into their now-promising future — Wonder Woman 1984, The Suicide Squad, The Snyder Cut, The Batman, The Flash, and Black Adam are all legitimately tantalizing projects — The Post-Credit Podcast figured that now would be as good of a time as any to take a trip back through the franchise thus far, looking at each-and-every film (both wonderful and dreadful) that got us to this point, beginning with Man of Steel.

🗣HEY, uh Krypton High Council or whatever, maybe you should listen to Jor-Nye The Science Guy when he was warning you that the planet was about to explode.

Originally intended to be a Christopher Nolan-esque, standalone Superman franchise, Man of Steel was haphazardly retrofitted to become the launch of the DC Extended Universe — Warner Bros’ up-and-down attempt at recreating the magic of the unprecedentedly successful Marvel Cinematic Universe — which has seen revolutionary highs such as Wonder Woman and infamous lows such as Justice League. But before all of that shared-cinematic-universe chaos, Man of Steel was simply about one superhero and one superhero alone: Superman.

Is Man of Steel a misunderstood masterpiece? Or is it simply an overly-violent, average beginning to a subpar franchise? On this week’s episode of The Post-Credit Podcast.