Jared Leto Voices Support For ‘The Ayer Cut’ Of ‘Suicide Squad’, As If We Haven’t Already Suffered Enough 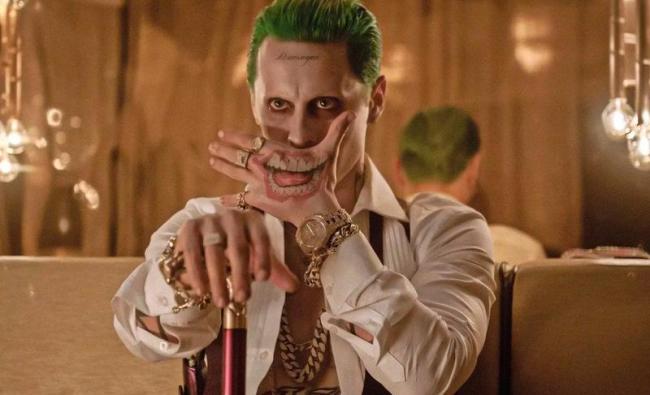 Here are the depths to which my petty distaste for Jared Leto sinks: on our entertainment podcast, when we review and recap movies, we give out awards, and the award for the film’s worst performance is named… The Jared Leto Award.

Aside from feeling like he’s an overrated and over-performative actor, his portrayal of Joker in Suicide Squad (which was now four-and-a-half years ago) has, more than anything else, just pissed me off. I really don’t have an eloquent way of explaining it other than I just fucking hate it. The second they released those first-look images — the one that revealed he had “damaged” tattoo on the center of his forehead — I knew Suicide Squad would be D.O.A.. Whether it’s his fault or director David Ayer’s fault is a moot point, because the fact is neither of them ever looked at each other and decided “you know what, this looks ridiculous.” And with that being the case, I — likely along with many other fans — could really give a fuck less about the “Ayer Cut” of the film, despite the fact that Leto and Ayer both continue to beat that drum.

RELATED: Joker And Deathstroke Will Appear In ‘The Snyder Cut’ – What Does It All Mean?

“I would love for him [Ayer] to be able to work on that [the “Ayer Cut” of Suicide Squad] and make the film of his dreams. It’s always hard when you make these movies because it’s such a pressure cooker. There are so many decisions that have to be made in a short amount of time,” Leto told Variety.

“My hat’s off to the directors and the producers, and the studios. It’s not easy. You never start with something that’s perfect. It’s a race to try to make it as good as you can in a short amount of time. So I get it, having another swing at things? I’m sure we all can use that.” [via Variety]

Ever since news of “The Snyder Cut” of Justice League became public, Ayer, Leto, and a subsection of fans have been hoping that Warner Bros. will do the same with Suicide Squad. Unfortunately for all of them, they fail to realize the main difference between the two: one of them stars Gal Gadot and the other doesn’t. Just kidding, but not really, because that’s sort of the point: one of these projects stars the legendary trinity of Wonder Woman, Batman, and Superman, while the other stars Harley Quinn, Will Smith’s Deadshot (who’s not returning for the soon-arriving The Suicide Squad), and, uh, Cara Delevigne as the bad guy. That‘s the difference.