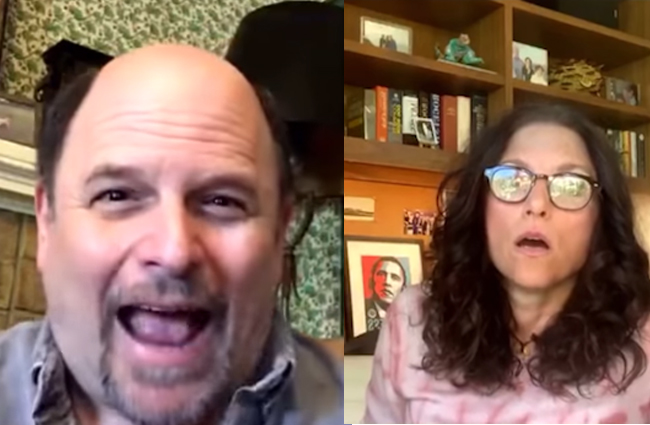 It feels as though just about anyone could get insider information about a TV series and movies.

Websites and magazines drop hints about the winners of The Bachelor and The Bachelorette before the season even starts, The Last of Us 2 had major spoilers drop online, and even George R.R. Martin couldn’t shut the hell up sometimes when it came to Game of Thrones.

Back before the dawn of the internet and social media, spoilers and leaks weren’t a huge problem, but big money could be made by anyone with insider knowledge of TV shows and movies.

The actors themselves could even make money but would likely lose their jobs and get blackballed if caught.

Jason Alexander revealed this week how he was offered bribes for information about the series finale of Seinfeld.

In an online discussion with former castmember Julia Louis Dreyfus, Alexander explained how the request came from an unlikely person – his own publicist!

The duo was discussing the secrecy behind filming the Seinfeld finale on Instagram Live and how walls had to be built around the set to keep people from spying.

“I remember thinking at that time, ‘Seriously? Who gives a shit?’” Louis-Dreyfus said.

Alexander then shared his bribery tale.

“My own publicist — I don’t know if this came for you, too — my publicist was asking me if I was willing to leak out some secrets for money,” he said. “And I went, ‘They’ll kill us!’ How can you do that?”

Louis-Dreyfus looked surprised, then replied that she hoped Alexander fired the publicist. He joked, “No, I gave him a raise.”

Alexander likely could have made decent money if he didn’t have morales because the Seinfeld finale was a HUGE deal.

The show ranks as the fourth most-viewed series finale ever, behind M*A*S*H, Cheers, and The Fugitive.

Later in the interview, Alexander shared a story about asking to be written off the show.

After adding Elaine into the mix as Jerry’s best female friend, Alexander was having a hard time understanding how he fit into the show.

“It was an episode that happened shortly after you were hired for the show,” recalled Alexander.

“I kept saying to Larry ‘So explain the way George relates to Jerry and the way Elaine relates to Jerry. If she’s not his girlfriend, she’s just a friend? Like a best friend?’ and he went ‘yeah’ and I said ‘well then what am I? What differentiates her from George?’

And then they wrote me out of an episode.

And that’s when I came back and went ‘Larry, you took me from a really good career in theater in New York. And that’s all I ever wanted. Now, this is great, but I’ve turned my life upside down to be here. And if you don’t need me to be here every week, just write me out. I’ll go back to what I was doing.”

David was having none of that – and thank god – because there is no Seinfeld without George Costanza.

Julia Louis-Dreyfus hosted the Instagram Live to raise money for Direct Relief, an organization that helps healthcare workers on the front lines.