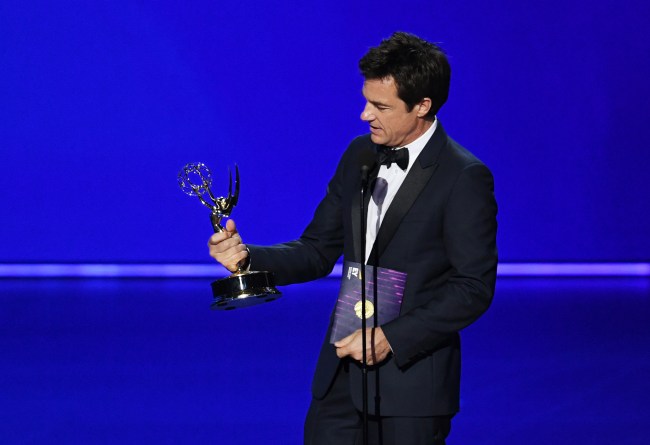 On Sunday night, Jason Bateman won the Emmy for Outstanding Direction of a Drama Series for his directing work in Ozark, beating out Succession,Handmaid’s Tale, and three different episodes of Game of Thrones.

Bateman, who made his directorial debut in 2013 with Bad Words and also serves as executive producer on Ozark, looked genuinely flabbergasted at the win.

It is best viewed in slow motion.

Slow motion of the greatest reaction ever to winning an award. Jason Bateman. The best. #Emmys2019 pic.twitter.com/EK5vfDfT0y

After the win, the 50-year-old actor said it was “very shocking,” and pointed to the immense degree of difficulty it required to shoot Game of Thrones episodes.

That it was. In a March 2019 piece in Vanity Fair, Jorah actor Iain Glen described the insane conditions the GOT cast and crew suffered through to shoot the final season of the show.

It was the most unpleasant experience I’ve had on Thrones. A real test, really miserable. You get to sleep at seven in the morning and when you wake in the midday you’re still so spent you can’t really do anything, and then you’re back. You have no life outside it. You have an absolute fucked bunch of actors. But without getting too method [acting] about it, on screen it bleeds through to the reality of the Thrones world.

Davos actor Liam Cunningham said the crew was getting 40,000 steps a day on their pedometers and Maisie Williams added that there were moments when she was “broken as a human and just want to cry.”

So, Bateman’s reaction to winning was likely 100% genuine, especially seeing as the aesthetic in Ozark was awesome, but uniform.

When I’m depressed but my friends are still supportive pic.twitter.com/N04AQF6lRw

Jason Bateman’s reaction to winning an Emmy is the same reaction Michael Bluth has whenever George Michael talks about Ann pic.twitter.com/8eCXjZrZWR

Narrator:
Michael Bluth was not even aware he was nominated.#Emmys pic.twitter.com/TVKRg1Szlb

Jason Bateman’s reaction to winning an Emmy is the truest example of Art imitating Life and Life imitating Art pic.twitter.com/kTWUtejaZj

Ozark‘s coming back to Netflix for a 10-episode third season with the exact release date yet to be determined.

I'm happy for me, but concerned for Marty – it's official OZARK 3 is on its way. pic.twitter.com/xeGXZxfrjB