In Honor Of The 20th Anniversary Of ‘American Pie,’ Jason Biggs Recalls A Phone Call That Gave Him The Strength To Bone An Apple Pie 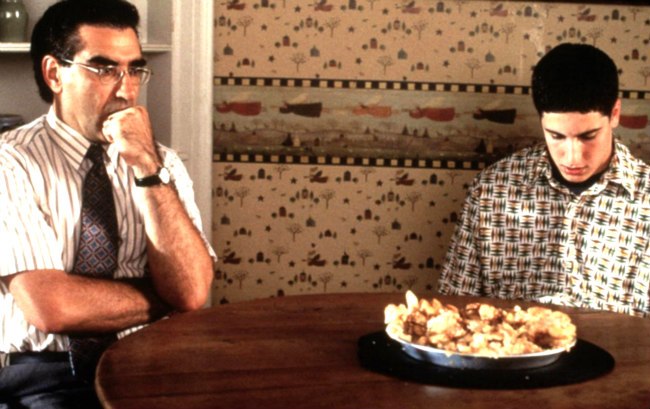 I watched the movie again last summer and my overwhelming takeaway was that there is no fucking way the public would allow for it to be made today. They broadcast Nadia double clicking her mouse to the entire town. Even Blink-182!!! That has #Movement written all over it.

In any event, Jason Biggs sat down with the New York Times and discussed the most famous scene in the movie: when Biggs bones the warm apple pie. Biggs claims that he still gets sent free apple pies at restaurants and revealed that he dealt with an internal struggle before shooting (pun intended) about whether or not his career should hinge upon sticking his meat sword in a baked good.

Biggs said, “I was just like, ‘I’m going to put my penis in a pie? I’m really going to do this. Could this come back and just totally haunt me? Am I about to ruin my career before it even starts?’ I called my manager, and I was like, ‘Man, I am about to go film that scene, and I’m kind of having a bit of a moment. Should I be freaked out?” He was like, Jason, you go and [have sex with] that pie with all you got, man.”

Producer Chris Moore claimed that the pie was originally intended to be a McDonald’s apple pie, but after a cringeworthy phone conversation with a Mickey D’s representative, that idea was quickly shelved.

Moore said: “That was one of the funniest phone calls I’ve ever been on, listening to the representative from McDonald’s say, ‘Wait. You want a character to put on the apple pie as if he was trying it out on his manhood.’”

Biggs revealed how the cast and crew had to pivot and pull off one of the great fake jobs in movie history.

“I wasn’t aroused, obviously, so it was kind of more like [my penis] was against it. It wasn’t in it, if you will. Also, it was a fake pie. It was a real tin pie case, but then it was Styrofoam on the inside. Then we put real apple pie pieces all around it, and all around my region. I was sort of flush against the pie as opposed to being inserted into the pie, if you know what I mean.” (New York Times)

It’s a damn shame Kobe Bryant won an Oscar for that stupid short cartoon and Biggs didn’t win shit for drilling a styrofoam pie. There really is no justice in this world.