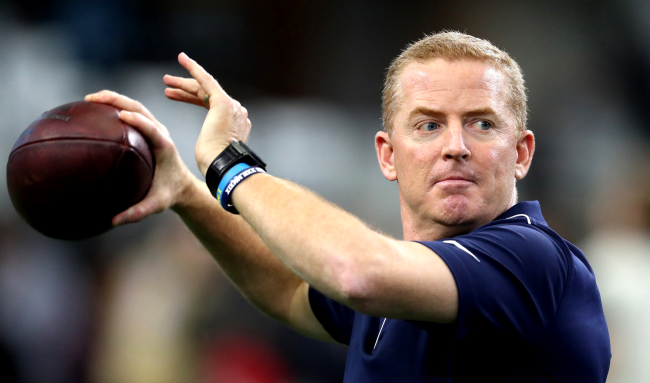 Deion Sanders, now the head coach at Jackson State, ruffled some feathers last month when he got upset that a member of the media referred to him as “Deion” and not “Coach” while incredibly comparing himself to Nick Saban.

On Thursday, former Dallas Cowboys head coach Jason Garrett, now the offensive coordinator for the Giants, pulled a similar move, telling the media to refer to him as “Coach” and not “Jason.”

Garrett, in his second year with the Giants, was walking off the podium after his media session on Thursday when a reporter said to him, “Good to see you, Jason.”

Garret replied, ““Good to see you, Coach. That’s how we do it around here.”

Now, whether Garrett was serious or was just joking with his ridiculous request that the media refer to him as “Coach” remains to be seen.

Pat Leonard of the New York Daily News gave no indication that Garrett was kidding, but either way, this was certainly one way to get Giants fans’ minds off the giant brawl the team had with… itself this week.

Related: Video Shows That The Hit That Started The Giants’ Brawl Was Just A Standard Tackle On Corey Clement

Maybe he is just trying to take the focus off Saquon Barkley and Kenny Golladay both dealing with injuries before even playing a pre-season game this year?

Regardless of Garrett’s motive for the request, he definitely got a lot of people on Twitter very wound up.

I can not wait until this man gets fired

I’d be more comfortable addressing the postmaster as “general” than I would be addressing Garrett as “coach”.

Any time I see Jason Garrett, the word good never crosses my mind.

Until he can prove he’s a competent offensive coordinator who does rank in 31st in point per game, he shall remain Jason

Why should members of the media call him coach? He’s not their coach!