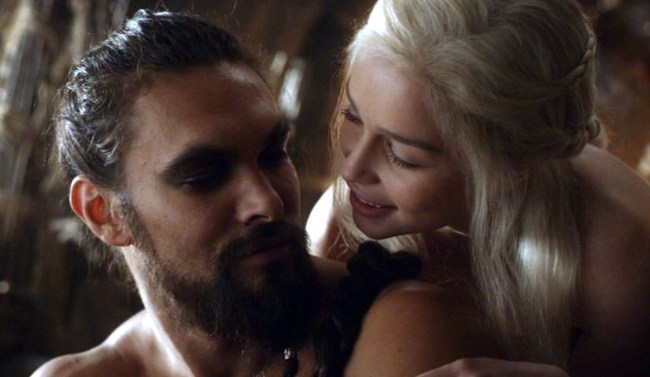 Jason Momoa, star of the upcoming Netflix film Sweet Girl and Warner Bros’ Dune, recently did an interview with the New York Times that broached the subject of Game of Thrones’ infamous rape scenes in its early goings.

Momoa, 42-years-old, was asked by New York Times writer David Marchese if he feels differently about some of the scenes he appeared in, which featured his character Khal Drogo sexually assaulting Emilia Clarke’s character Daenerys Targaryen, most notably in the pilot episode following their wedding. In the novels, their wedding-night sex is consensual, but showrunner David Benioff and D.B. Weiss made the change for the series.

“I don’t know how much you followed any of this, but “Game of Thrones” inspired a lot of discussion about its depiction of scenes of sexual assault and its treatment of women generally. Do you think differently today about those scenes?” Marchese asked.

“Would you do one now? Do you have any regrets? Those types of scenes can seem as if they belong to an older cultural moment.”

At first, Momoa seemed to answer the question no problem, saying that it was important to “depict” Khal Drogo and his “style”, which he compared to that of Genghis Khan.

“It was a really, really, really hard thing to do. But my job was to play something like that, and it’s not a nice thing, and it’s what that character was. It’s not my job to go, ‘Would I not do it?’ I’ve never really been questioned about ‘Do you regret playing a role?’ We’ll put it this way: I already did it. Not doing it again.”

At the end of the interview, though, as the pair were saying their goodbyes, Momoa circled back to the question, letting Marchese know that he considered it to be icky:

“I wanted to bring something up that left a bad feeling in my stomach. When you brought up “Game of Thrones,” you brought up stuff about what’s happening with my character and would I do it again. I was bummed when you asked me that. It just feels icky — putting it upon me to remove something,” Momoa says.

He then points out, even if he did have an issue with it, he was just an actor doing his job:

“As if an actor even had the choice to do that [not do the scene]. We’re not really allowed to do anything. There are producers, there are writers, there are directors, and you don’t get to come in and be like, ‘I’m not going do that because this isn’t kosher right now and not right in the political climate.’ That never happens. So it’s a question that feels icky. I just wanted you to know that.”

For what it’s worth, while the scene has been controversial since it aired, Emilia Clarke has since credited Momoa with “protecting” her throughout the filming of season one:

“It’s only now that I realize how fortunate I was with that, because that could have gone many, many, many different ways,” she said on Dax Shepard’s Armchair Expert podcast in 2019.

“Because Jason had experience – he was an experienced actor who had done a bunch of stuff before coming on to this – he was like, ‘Sweetie, this is how it’s meant to be, this is how it’s not meant to be, and I’m going to make sure that that’s the fucking gaze.’ He was always like, ‘Can we get her a fucking robe? She’s shivering!’ … He was so kind and considerate and cared about me as a human being.”

“He was crying more than I was,” Clarke said of Momoa during the filming of the scene.

RELATED: HBO Has Released The First Official Looks At ‘House of the Dragon’