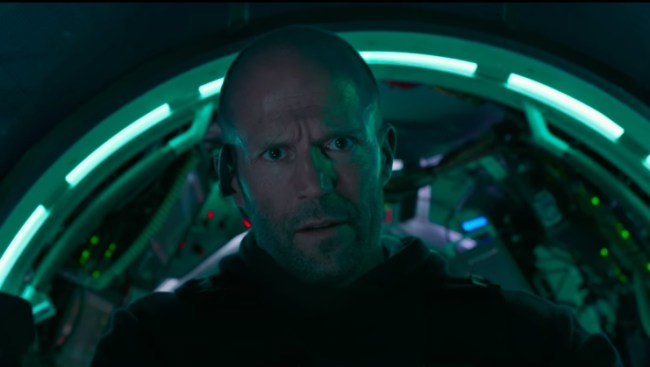 I’ve previously mentioned “Movies Where Dwayne Johnson Fights Things” is one of my favorite movie genres, followed very closely by “Films Where Jason Statham Forebodingly Says ‘Oh No’ Before Fighting Things.” Much like Johnson, he’s basically played the same character in every single movie he’s been in— including Crank 2, which is unquestionably his magnum opus thanks to its incredible ability to not take itself seriously for a single second. If his newest movie takes the same approach, we could be in for one hell of a treat.

The recently released trailer for The Meg features Statham playing a rescue diver aboard a research vessel off the coast of China that gets attacked by a giant shark (as well as a giant squid, because if you’re going to go down the route this movie looks like it decided to, you might as well go all the way). Could it be summed up as “Jaws, but big?” Sure, but Jaws didn’t have a jacked British guy willingly jumping into the water to fight a giant creature from the Paleolithic era.

I could go on all day about just how amazingly absurd this movie looks, but the only real way to appreciate it is watching the entire trailer.

In the film, a deep-sea submersible—part of an international undersea observation program—has been attacked by a massive creature, previously thought to be extinct, and now lies disabled at the bottom of the deepest trench in the Pacific…with its crew trapped inside. With time running out, expert deep-sea rescue diver Jonas Taylor (Jason Statham) is recruited by a visionary Chinese oceanographer (Winston Chao), against the wishes of his daughter Suyin (Li Bingbing), to save the crew—and the ocean itself—from this unstoppable threat: a pre-historic 75-foot-long shark known as the Megalodon. What no one could have imagined is that years before, Taylor had encountered this same terrifying creature. Now, teamed with Suyin, he must confront his fears and risk his own life to save everyone trapped below…bringing him face to face once more with the greatest and largest predator of all time.

All you have to do is throw Rainn Wilson in for a little bit of comic relief and baby you got a stew going! The Meg will swim its way into theaters on August 10.