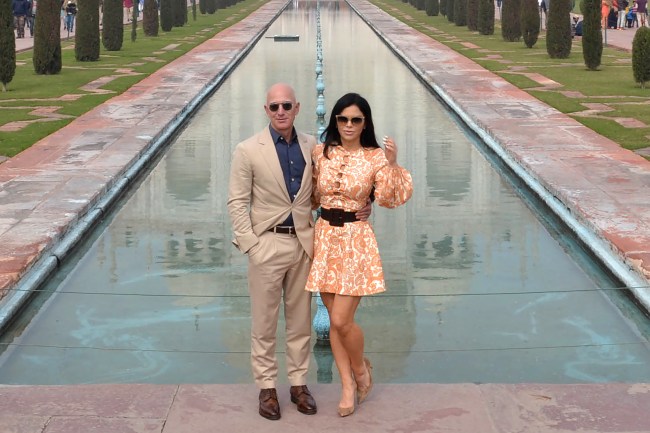 In the 2004 book The Paradox of Choice–Why More Is Less, psychologist Barry Schwartz argues that eliminating consumer choices can greatly reduce anxiety for shoppers.

If this is the case, Jeff Bezos is scientifically the most anxious man on the planet.

With a net worth of One Dollar Less Than Infinity, Bezos is so rich that the average American spending $1 is similar to Bezos spending $1.2 million. This is sad, but true.

While most of us plan to walk into a Walgreens on the 14th to pick up the old lady fake flowers and some Valentines Day branded candy, Bezos is looking to gift Lauren Sanchez flowers, candy, and nine-figure mega mansion.

According to the New York Post, the richest man in the world (or second post-divorce?) has been actively shopping for homes in the Beverly Hills and Bel Air neighborhoods with his girlfriend, with some mansions they’ve looked at listed for more than $100 million, sources said.

“I know Jeff is out there. He’s seen everything that is relevant,” Los Angeles high-end real estate broker Drew Gitlin of Berkshire Hathaway told The Post.

Gitlin claims there are fewer than 10 houses in the Los Angeles that are lavish enough for Bezos’ taste.

One property that made the cut was the insane 10.1-acre estate at 750 Bel Air Road known as “Chartwell,” which recently sold for $150 million after Bezos passed on this dump.

Chartwell was the priciest home for sale in the US when it was listed in 2017 for $350 million, but was eventually bought for $150 million in December to Lachlan Murdoch, co-chairman of News Corp.

If you are a lover of good properties, you need to watch this video.

The Chartwell estate. I have never seen anything like this before. The materials used in the interior is giving me headache. 🙊🙊🙊 pic.twitter.com/DGAW2oxJtZ

The Post also claims that Bezos showed interest in Bel Air’s Casa Encantada, a 40,000 square ft. mansion with 60 rooms, (including a reception hall) on a property that features basketball courts, pools, fish ponds, and probably a dead body buried somewhere. Casa Encantada has twice set the record for highest residential sale in the nation.

"Casa Encantada" is currently the most expensive listing in the United States. Owned by Gary Winnick, the founder, and chairman of global crossing, this 60-room property is officially on the market for $225 million.
Read the entire article here:https://t.co/0vJHkU4Ab4 pic.twitter.com/3TC5VbfZ06

Another shitbox that is in Bezos’ wheelhouse: Palazzo di Amore

#MansionMondays The Palazzo di Amore megamansion in LA was once the most expensive listing in the US at $195MM pic.twitter.com/AXwIi8ysLe

Twenty five acres that includes a Turkish-style bath, a disco, a vineyard, a 12-car garage, and a 50-seat movie theater.

I present to you: Villa Firenze.

I’m starting to get the inescapable urge to marry Jeff Bezos and his weird eye.