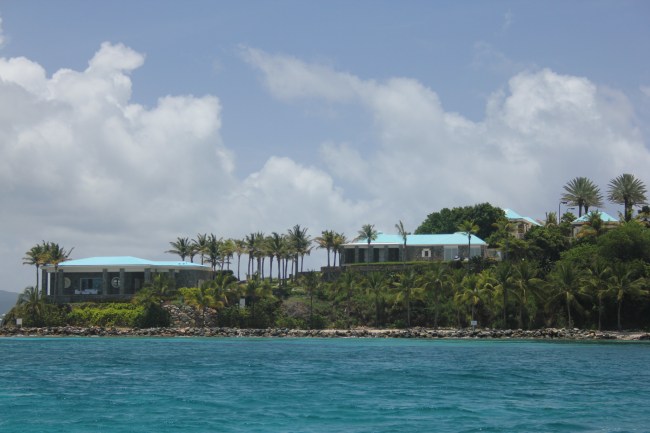 Very little is known about Jeffrey Epstein’s private island in the Caribbean, but an intrepid journalist snuck onto the mysterious hideaway of the convicted pedophile. The guerrilla journalist captured video to show the world what the disgraced financier’s lair known as “Pedophile Island” actually looks like.

Previously, there has been drone footage of Epstein’s private island (seen below), but a new video is the first footage from directly on the island.

Luke Rudkowski is the founder of We Are Change, a self-described “nonpartisan, independent media organization comprised of individuals and groups working to expose corruption worldwide.” Rudkowski along with Jeff Berwick, the founder of the anarcho-capitalist blog The Dollar Vigilante focused on gold and Bitcoin, to explore Epstein’s island.

if you haven't watched our expose inside of #Epstein pedo island, you can right now while the video is still up. https://t.co/urkiRNZ5eW pic.twitter.com/hhysrAeFKY

“It’s quite a big place, with the mansion and the temple. There’s a huge sundial, very interesting,” Berwick said. “It was kind of creepy because at first, we didn’t see anyone. We even went into offices and places. Nothing was locked. It was eerily weird because it was no one, but later we found out that there were some people.”

“We went into offices and stuff, it’s cleaned out,” Berwick said. “There’s no evidence of anything.”

They explored the island for about 30 minutes and found piles of trash as if there was a huge cleanup effort before or after the FBI raided the island in August when they confiscated computers and other belongings.

On the island, there was an assortment of construction vehicles, including an excavator, cement truck, cherry picker, and bulldozer. There was even an ambulance.

“He had a whole private massage room that was hidden behind a lot of greenery,” Rudkowski said.

Berwick added that the infamous blue and white-striped painted temple on the island looked like a “Hollywood set.” “He is or was a billionaire, that seemed like the cheapest temple I’ve ever seen, I could have built that myself for like $5,000. The door is painted on.”

“The most interesting things that I personally found were these little Satanic gargoyles with horns on their heads that were all over the property that were very creepy,” Rudkowski said. “I also found a chair that was completely made out of horns and animal hide that was very creepy and kind of very weird to look at.”

They noticed that the lawn, landscaping, and pool were still being maintained, meaning someone is still on the island and they were correct. They had to cut their exploration short because there were “people running all over,” “screaming,” and “people going around on golf carts.”

Jeffrey Epstein was allegedly found dead on August 10, 2019, inside his prison cell at the Metropolitan Correction Center (MCC) in Manhattan, New York. The initial report from MCC said Epstein was found dead after allegedly committing suicide by hanging himself with bedsheets.

On August 16, New York City medical examiner Barbara Sampson ruled that Epstein’s cause of death was suicidal hanging. However, famed forensic pathologist Dr. Michael Baden believes Jeffrey Epstein was more likely to have been strangled to death than committing suicide.

Dr. Baden has worked on some of the most significant cases in the last half-century, including O.J. Simpson, Martin Luther King Jr., Aaron Hernandez, John F. Kennedy, and Phil Spector. Dr. Baden, who has examined over 20,000 bodies, believes that Epstein’s neck injuries are more consistent with homicide by strangulation than suicide by hanging.

Those who believe in the Epstein conspiracy theories take Dr. Baden’s expertise in the matter very seriously because they believe the convicted pedophile was murdered while in prison because there were so many extraordinary coincidences. Conspiracy theories suggest Epstein’s former cellmate attempted to murder him. Conspiracy theorists also question how both security cameras monitoring Epstein’s jail cell mysteriously did not work and how both correctional officers assigned to Epstein somehow both fell asleep for three hours the night Jeffrey allegedly committed suicide.

Epstein was arrested at Teterboro Airport in New Jersey on July 6, 2019, on federal charges for the sex trafficking of minors in Florida and New York. FBI agents reportedly discovered “hundreds – and perhaps thousands – of sexually suggestive photographs of fully – or partially – nude females” after raiding Epstein’s Manhattan townhouse according to federal court documents.

Here are other drone videos of Epstein’s private island taken in the last few months by a YouTube account named “Rusty Shackleford.”