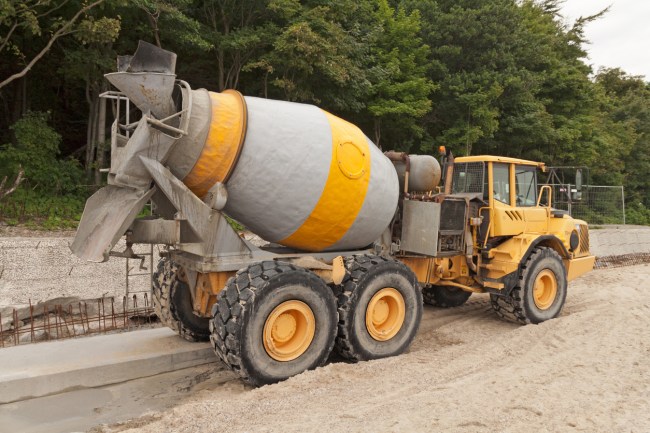 A new report states that convicted pedophile Jeffrey Epstein express-shipped a $100,000 cement-mixing truck to his private island in the Caribbean. The revelation is newsworthy because Epstein shipped the cement mixer only weeks before the exposé that ultimately led to his arrest was published.

But seriously, what's up with this weird temple thing on Jeffrey Epstein's private island? pic.twitter.com/njxfg2HahN

The 72-acre island features a helicopter pad, multiple buildings, including a creepy blue-and-white-striped golden dome-topped temple-like building on the top of a hill. There appears to be a medieval-era-looking front door. There are gold statues including Poseidon, the Greek god of the sea. There are also bizarre designs all around the temple. Drone footage from August 14, 2019, shows two beds inside the weird building.

The Daily Mail is reporting that Epstein ordered a Carmix 5.5 XL concrete mixer truck and paid extra to ensure a speedy delivery to his private Caribbean island. The self-loading cement mixer arrived at the billionaire financier’s island on November 7, 2018, just three weeks before the Miami Herald published their eye-opening exposé that would ultimately rock Epstein’s world and put him in prison.

On November 28, 2018, the Miami Herald’s a damning series of articles titled “Perversion of Justice” that exposed the Epstein’s abuse of underage girls, identified nearly 80 victims and questioned the motives of why the wealthy man with ties to financial, political and cultural elites was given such lenient sentences in his prior convictions.

The Daily Mail report states that Epstein took responsibility for any damage to the cement truck in transit by paying upfront so that it would arrive even sooner. Epstein sent the machine with an Express Bill Of Lading, an unusual and expensive way of shipping an item so that it arrives quickly according to the Daily Mail.

William George, an analyst with shipping data firm Import Genius, told Daily Mail: “While the purchase of the cement mixer on its own is not suspicious, particularly given the reported and approved repair of cisterns on Little St. James, both the timing of the shipment and the fact that it’s the item in our records shipped with an express bill of lading do raise concerns.”

On July 6, 2019, Epstein was arrested at Teterboro Airport in New Jersey after flying back from France. He was charged with sex trafficking and conspiracy to engage in sex trafficking. The charges accused Epstein of paying girls as young as 14 for sex and he used them to recruit other young girls between 2002 and 2005.

A dozen FBI agents raided Epstein’s Manhattan townhouse last week and seized “hundreds and perhaps thousands” of photographs of nude underage girls according to federal prosecutors. Investigators also discovered a fraudulent Austrian passport that had Epstein’s photo but had another name and it expired in 1987. FBI agents have also raided the buildings on his private Caribbean islands on Monday.

On Saturday, Jeffrey Epstein was said to have committed suicide in his federal jail cell at the Metropolitan Correctional Center (MCC) in New York City, but under potentially suspicious circumstances. The 66-year-old allegedly hung himself using the bunk bed and the bedsheets. Epstein’s death came only hours after 2,000 court documents against the convicted pedophile and alleged sex trafficker were released.

The Daily Mail points out that Epstein also shipped an industrial shredder to his private island in 2008 “shortly after reaching a controversial non-prosecution agreement in Florida” for another case where he pleaded guilty to a state charge of procuring for prostitution a girl below age 18. Besides paper, the industrial shredder can destroy CDs, three-ring binders and hardbound documents.