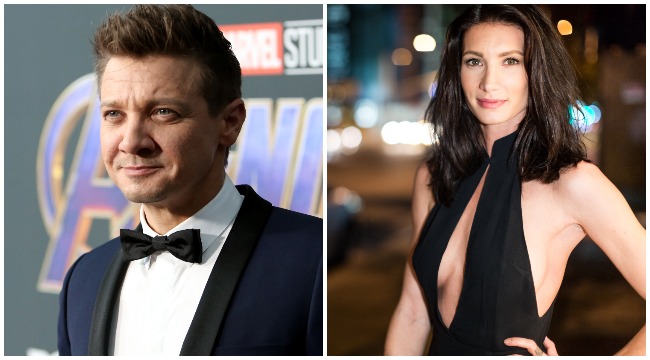 As is customary with bitter custody battles, each party is publicly exposing the darkest, most embarrassing facets of the other’s character, all to the morbid amusement of the public! Yay!

Just a day after news hit that Jeremy Renner’s ex-wife, Sonni Pacheco, accused the 48-year-old actor of being a coke head and threatening to kill her (even putting a gun in his own mouth), Renner has hit back with damning allegations of his own.

According to court docs obtained by TMZ, the pair exchanged nude photos while they were married, but over the course of their contentious custody battle she sent uncensored pics of his dick and balls to their lawyers and the evaluator “for no other purpose than to cause me extreme embarrassment.” Even though, he claims, the Canadian model sent him nudes first.

The documents also claim that Sonni is obsessed with Jeremy’s sex life and the sex life of others close to them, even going so far as to track down sexy photos of their nanny to send to custody evaluators.

Renner says he is concerned that his ex’s unhealthy obsession with sex is toxic to the upbringing of the six-year-old daughter they share together. Jeremy says he’s deeply concerned Sonni is “exposing Ava to such dark, graphic, sexual material on a daily basis.”

The pair married in January of 2014 and were divorced less than one year later, citing irreconcilable differences. No kidding.