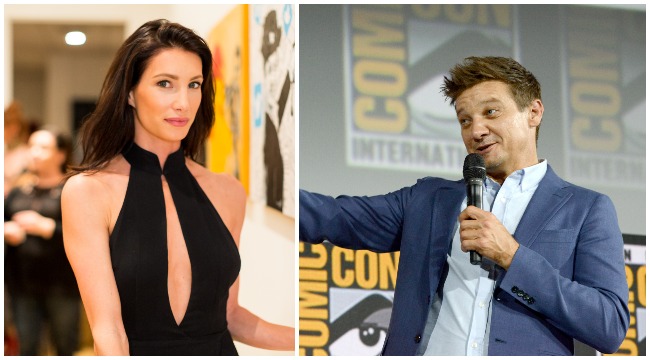 Jeremy Renner and Sonni Pacheco’s 2014 marriage lasted a total of one full year, which is a pretty extensive run for a celebrity marriage.

Since their split, the two have taken turns at eviscerating the other’s character in the name of money or custody over their daughter, Ava.

Renner made news this week after he used a global pandemic as a bargaining chip to the court to reduce his monthly child support payments, which he alleges are being used as a “slush fund” by his ex, from $30,000 per month to $11,000.

Pacheco has since released a statement to “address the lies” herself, claiming that Renner has inflated his monthly payments significantly. The Canadian artist also referred to the bitter years since their breakup as “seven years of hell.”

“The reported monthly income has been greatly exaggerated,” Pacheco said in her statement, adding that she has yet to see the court papers herself because they were filed on her birthday.

“First, I do not receive 30k in monthly child support,” the Canadian artist said. “Second, all of my savings and Ava’s savings have been drained due to lawyer fees, as my concerns for Ava’s safety have been an ongoing battle for years now. I have, and will always choose to protect Ava when I find out about disturbing behavior exhibited by her father at his homes that put her in danger.” [via Page Six]

Pacheco claimed in court docs that their young daughter has consistently witnessed her father’s erratic behavior, been put into danger by his alleged drug use, and been exposed to a revolving door of women coming and going from Renner’s house. She even provided a list of their names: “Tayler, Kelley, Natalie, Summer, Faith, Christina, Naz and Jessica.”

Renner has gone on record claiming his ex is a sex addict who has revealed pictures of his genitals in front of the custody evaluators in an attempt to embarrass him.