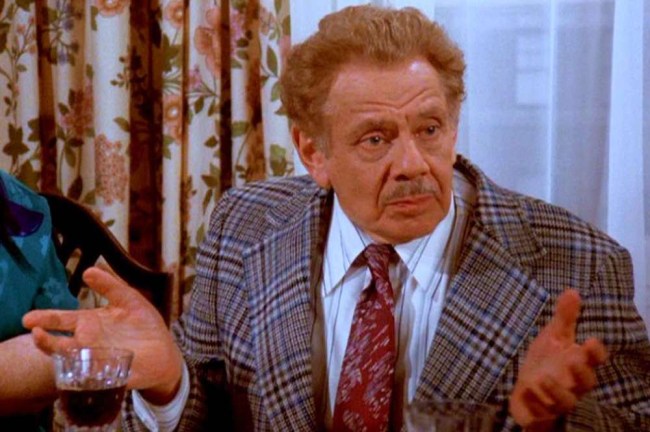 The world awoke to sad news this morning, as it was reported that legendary comedian Jerry Stiller had passed away of natural causes at the age of 92-years-old.

While Stiller’s career spanned decade upon decades, he’s perhaps best known for the role that defined the twilight of his life: his portrayal of George Costanza’s father Frank on Seinfeld.

I’m of the opinion that Seinfeld is the best television comedy of my lifetime — and probably all-time — by a country mile. You can have your Cheers and The Office and Parks and Rec and Friends, go ahead. I was, am, and always be a Seinfeld guy.

Stiller’s deranged Frank Costanza was one of the best characters to ever grace the series, as he provided the perfect window into who George Costanza is and how he became that way.

Apparently, though, Stiller actually almost passed on the role, which would have deprived the world of one of the greatest sitcom supporting characters of all-time. Luckily, cooler heads — something Frank Costanza definitely did not have — prevailed.

“They said they want you to play the father of George Costanza on Seinfeld, and I said, ‘Who’s Seinfeld?'” Stiller recalled. “They said it is a very funny show and it is on the air right now. And I said, ‘Well, I am in a Broadway show. I am about to rehearse. I pass. [They said] ‘What?!’ I pass. I don’t want to do it.”

So, the late John Randolph was cast in the part, but it was not working out and Stiller explained that co-creator Larry David came back to him six months later, after his Broadway show had closed, and asked him again to do the role.

At first, David said he wanted Stiller to play the elder Costanza much more subdued and even-keeled, the opposite of the yelling, hysterical Mrs. Costanza, played by Estelle Harris. David also wanted the actor to wear a bald cap to match George’s hairline. Stiller said he knew right away all that wouldn’t work.

“We started rehearsing the first show, and she’s screaming at me all the time and I am taking it. And I said to myself, ‘I am going to get fired the same way as the other guy because nothing is happening on stage,'” Stiller recalled. “So when we shot the dress rehearsal, before we go on stage with a live audience, she started screaming at me, and I out of instinct, instead of just saying my lines, I [screamed back].”

Stiller continued, “Everybody starts laughing and David said, ‘Jerry, keep it that way.’ And that was the beginning of Frank Costanza.

jerry stiller making JLD break is still one of the funniest things ever pic.twitter.com/i711bpMcEv