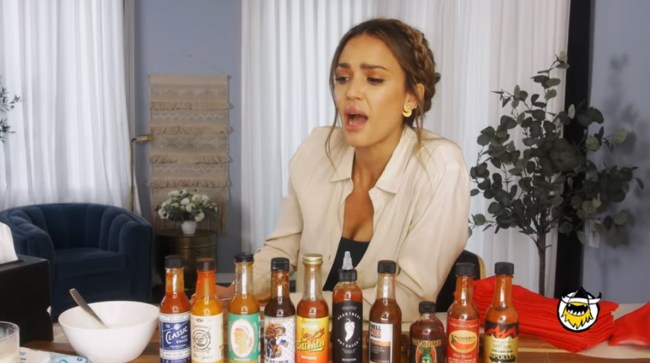 I used to be a huge Jessica Alba fan. You know, back when she actually did acting and wasn’t some kind of businesswoman slash influencer.

Yes, I know she’s been raking in the dough in that capacity, but it’s not nearly as fun as seeing her on screen in something like Sin City or… well… umm… Sin City: A Dame to Kill For. (She really hasn’t been in very many good and/or popular movies. Like, at all. Go figure.)

Basically she’s been living off the status she gained on the Fox show Dark Angel way back in 2000 to 2002. Yes, now she’s on L.A.’s Finest, the Bad Boys spinoff that no one has any idea what channel it is on. (It’s on Spectrum, with Fox now airing it one season behind.)

Anyhoo… what I am getting at is I guess that’s the reason she was invited to appear on the latest episode of Hot Ones.

Good thing too, because she was actually pretty darn entertaining as her mouth was set ablaze by the hot sauces First We Feast had on tap.

In fact, things got so bad for Alba that she just started licking and eating random things like peanut butter in an effort to quell the massive amount of pain she was feeling.

“How’s that working out?” host Sean Evans asked her as she bathed her tongue in peanut butter.

“I’d love for you to report back the findings afterwards,” Evans requested.

To which she replied, “You mean… what happens to my f***ing mouth after this?! You wanna know?”

Then she literally shouted something that was completely unintelligible before dabbing her lips with the spoon filled with peanut butter.

Check out the entire episode below…