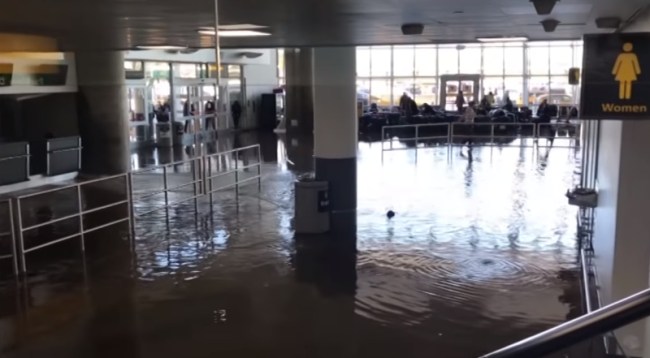 We’ve seen the widespread damage that Winter Storm Grayson has inflicted across the Eastern Seaboard from snow in Tallahasse, Florida to 30-foot swells battering cruise ship near New York City to frozen flooding turning Boston, Massachuesetets into an ice cube. The latest victim of Winter Storm Grayson is JFK Airport where travelers were standed thanks to the bomb cyclone and overwhelming flooding.

Videos show flooding and crews working to bail out a terminal at @JFKairport after a water main break at one of the busiest airports in the country. This comes after a winter storm forced a "surge" of rescheduled flights, stranding several international jets and their passengers. pic.twitter.com/lmohWL70bY

New York’s John F. Kennedy International Airport, one of the nation’s busiest airports, was teetering on chaos after flooding and inclement weather wreaked havoc. Delayed flights, canceled flights, stranded passengers, staff shortages, heavier than typical passenger loads, and baggage pileups caused weary travelers to be at each other’s throats on Sunday. A water main break only escalated the situation at the paralyzed airport and caused passengers to have to evacuate certain areas of the airport around 1:30 p.m. on Sunday. “There is a flood emergency, and there are exposed wires that could cause electrocution,” one worker said. “You’re not safe here. You must leave the floor.” There were hours-long waits on the tarmac and baggage claim that accelerated frustrations of weary travelers. To add to the already mounting issues at JFK, a China Southern plane clipped the tail of a Kuwait Airways airliner at 12 a.m. on Saturday.

Wow. Diverted aircraft from two days ago are still flying back to @JFKairport. And there's still no gate space for pretty much anything right now. pic.twitter.com/gEnSzBwAk7

On Saturday, there were 1,008 arrivals and departures and 94 canceled flights at JFK Airport. “Frigid temperatures continue to cause equipment failures and slower than normal operations,” the port Authority said in a statement. “Customers may experience residual delays, particularly for international flights.” one passenger, Jeremy Silver, said there was a “near riot” incident as he passengers attempted to board a Virgin Atlantic flight. “We haven’t slept in 2 days and we’re all *really* pissed,” one traveler said on social media. It looked like literal hell on Earth for those stranded at the crippled airpoirt.

"It makes me not want to fly anywhere and definitely not out of JFK." Travelers patience wore thin at NYC's JFK International Airport as long delays and compounding cancellations continued several days after a major winter storm battered the city. https://t.co/AEJ1MkAS66 pic.twitter.com/iUCq9ECxGa

@XLAirways_NA Fix this. We haven’t slept in 2 days and we’re all *really* pissed. #se40 #xlairways pic.twitter.com/dhUOe3tG8l

Mood is getting mutinous at the gate. I don’t envy the @XLAirways_NA staffers at the desk. pic.twitter.com/nAtnh4EtbJ

New alleged departure time is 5:30am and the gate looks like protesters are staging a sit-in (which they basically are): pic.twitter.com/m5Pt0V7j5A

Delta Airlines #DL419 and #DL445 are diverting to Boston because of the water main break at Terminal 4 at JFK Airport. pic.twitter.com/Hg5cdJ39Tf

A clue about some of the problems at JFK Airport right now. Um, maybe shovel those trucks out? Storm hit on Thursday. Today is Sunday. Wha? pic.twitter.com/nGpxdBjlh0

I leave you with this last photo of JFK baggage claim (one of three roped off sections that look like this) pic.twitter.com/n9EUo6jLEo