Boston Flooded By Icy Waters, Cars Are Frozen From Winter Storm Grayson – The Pics You Need To See 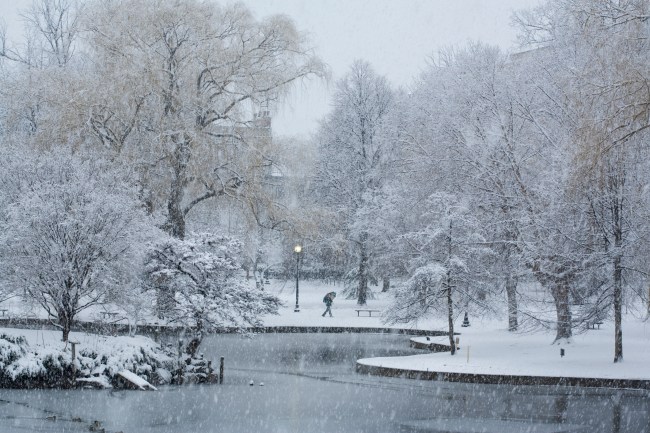 We’ve seen the unbelievable and potentially dangerous reach that the monster Winter Storm Grayson has had on the Eastern Seaboard — from the first snow in Tallahassee, Florida in decades to several inches of snow in Charleston, South Carolina to cruise ships getting battered by 30-foot swells in the Atlantic Ocean to Boston, Massachusetts getting flooded with deadly ice water.

A massive Nor’easter pummeled Boston this week and icy water flooded the city’s downtown. The sub-freezing air caused cars to become giant blocks of ice and forced many residents to evacuate. The National Guard was called into the city to rescue stranded residents where the floodwaters were as high as two feet in some areas. Saturday was the 12th straight day below freezing in Boston, dating back to December 26th. The photos and videos from the icy floodwaters submerging Boston caused by the bomb cyclone are hard to believe.

Water came up very quickly near #Boston harbor. Just for perspective… look at how high the water was on this fire truck! #SnowStorm #blizzard2018 #BOMBCYLONE #BOMBOGENISIS #snowbomb pic.twitter.com/pUEJkLZV88

A picture taken by a resident as a DXFD FF makes their way through deep water to assist a resident. #DXFD pic.twitter.com/shlWS3eR0S

Pancake ice for brunch this morning along the #Boston Harborwalk! pic.twitter.com/ouZmH9MAVk

Look at this video outside our window of flooding in #Boston historic #FortPoint #Seaport neighborhood that is causing big dumpsters to float down the street. #blizzard2018 @CNN @WCVB pic.twitter.com/mjfrZJYnKr

Looks like the owner of this vehicle in Boston will be working from home today!

The city has been blanketed with ice after a "bomb cyclone" made its way up the East Coast.

Ferocious waves, snow and ice trapped some families in their homes and drivers in the streets in Boston before they were rescued. @EvaPilgrim reports. pic.twitter.com/7WaCOALmzm

Trying to keep up with the snow from #WinterStormGrayson. Good thing I spent all that time on Hoth.

There were nearly 500 cars that were towed because of the Arctic weather. To add insult to icy injury, a sewer main break in Nantucket poured more than 1 million gallons of sewage into the harbor. Across the United States, at least 22 people have died this week because of severe weather. There were deaths in Wisconsin, Texas, North Carolina, Ohio, Michigan, Missouri, North Dakota, South Carolina, and Virginia.