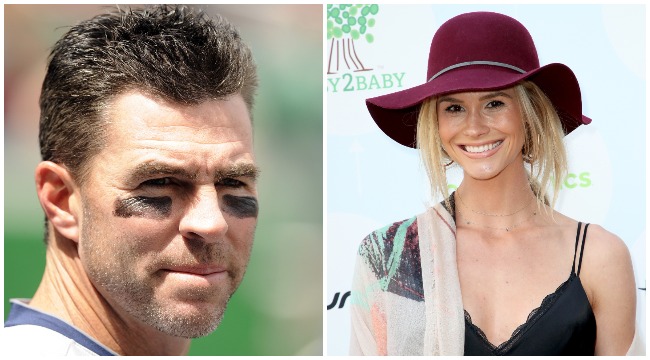 The best thing about not being a famous person is that all the hurtful, chaotic, irrational things said during an awful breakup fade away.

There is no public record. No public humiliation. Nothing concrete to self-assess. We just fix the drywall and move on.

Jim Edmonds and his estranged wife Meghan King Edmonds don’t have this luxury, and they are both throwing very public, very salacious, and very entertaining temper tantrums for the public to cringe at.

In September, just one day after the couple’s fifth wedding anniversary, Edmonds, 49, filed for a divorced from Meghan, 35, after she accused him of “having an affair” with 22-year-old Carly Wilson, one of the family’s four nannies.

“As far as threesomes go, there were a more than few initiated by Meghan and only Meghan,” Jim told Us Weekly on Monday.

Meghan was just getting warmed up.

“I think his attempt to sex shame me illustrates the vile mind of this man. I am the mother of his children and to attempt to exploit deeply personal decisions we made as a couple is his attempt to damage the mother of his children and also attempts to demean me in the most vulnerable way possible: sex. It’s sick to break me down like this while I’m with all of our kids every day and night and he’s on day 5 of gallivanting around Cabo with my former friend/whore whose going on shopping sprees with his new f–k buddy.”

(The current identity of Edmonds’ new squeeze has been unreported).

This is the part where we know that one, or both, of them are certifiably insane.

The former MLB star also accused his estranged wife of initiating threesomes on her own, and added, “Recently, I have learned that she carried on with a few of these women without me being present. Would that not be considered cheating?”

“I never carried on with any woman outside of these consensual acts,” Meghan told Page Six.

One of them must be lying, and whoever it is, deserves to be outfitted in a straight jacket.

Also, I contemplated not writing about this because relishing in the awful times of strangers is a dicey game, but then I realized that they’re fighting over fucking threesomes.