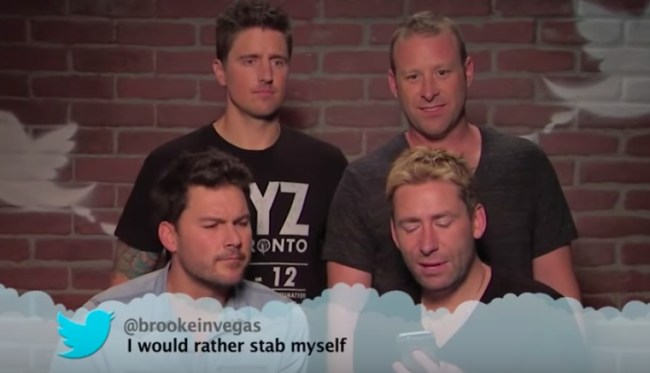 Every waking hour, celebrities are showered with praise by fans, catered to by brands, and yessed by yes-men and women. They have about 92 nationally-televised award ceremonies a year when they dress up like assholes to give each other trophies and urge us at home to donate to save endangered pigeons in Kazakhstan. It’s all suffocatingly smug.

So, it’s nice to witness some of these celebrities eat a large slice of humble pie from Gwyneth Paltrow’s gluten-free cookbook. Which is why Jimmy Kimmel’s Mean Tweets segment is the most entertaining in the late night game.

In the most recent Mean Tweets installment, trolls take aim at musical celebrities like Pink, The Chainsmokers, Jason Mraz, and Nickelback. Poor Nickelback, Arnold Schwarzenegger compared the current Congress to Nickelback, hemorrhoids, and herpes. Any time your name is lumped in there with STDs, gotta be a shot to the gut.

In any event, watch these rich dickheads get owned by 40-year-old virgins who would do anything to be there! BURN!

The Jason Mraz tweet made me laugh out loud. I hope we shared that laugh together. Hey, maybe we should grab a beer sometime. Maybe not. Whatever. Cool either way. Peace.