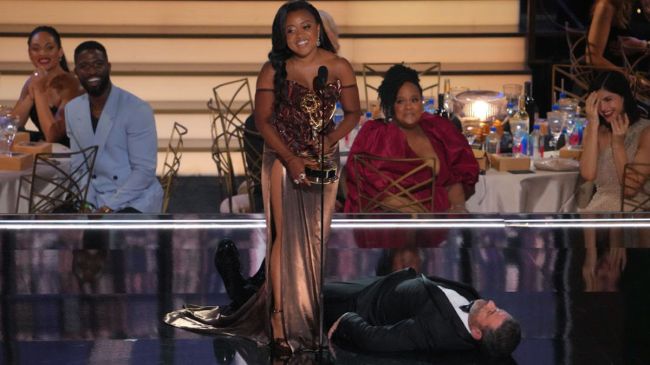 A permanent fixture of late-night TV’s bronze medal podium behind Jimmy Fallon and Stephen Colbert, Jimmy Kimmel must find other ways to get his name into the headlines, such as stealing the spotlight away from a young woman winning her first-ever Academy Award.

On Monday night, while Abbott Elementary creator and star Quinta Brunson was accepting the Emmy Award for Best Comedy Writing, Kimmel — whose late-night show Jimmy Kimmel Live! has lost in the category for 13 straight years — did a “bit” where he laid on stage pretending to be dead for the entirety of Brunson’s speech. Unsurprisingly, Kimmel was immediately and thoroughly crushed for it.

RELATED: Jimmy Kimmel Is Getting Crushed For His Cringeworthy Bit During Quinta Brunson’s Acceptance Speech At The Emmys

Hosting Brunson on his show on Wednesday, Kimmel apologized to the 32-year-old star, but did so in a remarkably insincere manner as he basically used the “I’m sorry… that people got offended” approach.

“I do want to explain this for those who may be confused by this,” Kimmel stated. “That was a dumb comedy bit that we thought would be funny. I lost, and then I drank too much, and I had to be dragged out on the stage. And then people got upset.”

“They said that I stole your moment, and maybe I did. I’m very sorry if I did do that — I’m sorry I did do that, actually. And also, the last thing I would ever want to do is upset you because I think so much of you, and I think you know that. I hope you know that.”

Brunson, to her credit, has handled both the moment and Kimmel’s pseudo-apology with nothing but class, which is certainly no surprise if you’ve ever checked out the wonderfully wholesome Abbott Elementary.