Some Good News!: J.K. Simmons Has Signed On To Appear As J. Jonah Jameson In Future ‘Spider-Man’ Films 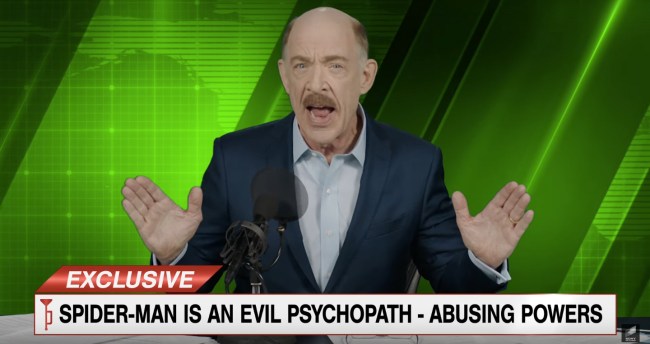 “Asked if audiences can expect to see him in the next MCU Spider-Man film after his post-credits Far From Home appearance, the actor replies, “I don’t know if I would use the word expect.” He explains that he signed on to do sequels, but the studio isn’t obligated to use him in subsequent films. Still, he seems to bear no ill will about this: “It’s great to have the opportunity, as these things evolve, to be one of the holdovers from the previous version.” [Entertainment Weekly]

After appearing stealing the show in the first three Tobey Maguire-starring Spider-Man films, Simmons — who won an Academy Award for Best Actor for his performance in Whiplash in the intervening year — returned to the role in the closing moments of Spider-Man: Far From Home in a legitimately hilarious reintroduction to the character.

Simmons’ appearance as J. Jonah in the Marvel Cinematic Universe also opens interesting possibilities in regards to a “multiverse”, which is a theme that was fully explored in Spider-Man: Into the Spider-Verse (in fact, the directors of the film reportedly wanted Maguire, Andrew Garfield, and Tom Holland to all appear) and teased — albeit a fakeout — in Spider-Man: Far From Home. Plus, not to mention the eventual crossover with whatever the hell Tom Hardy is doing over in “Sony’s Spider-Man Universe of Characters” — yes, they actually named it that.