Joe Rogan Blasts Media For False Reports He Took Horse Dewormer: ‘Do I Have To Sue CNN?’ 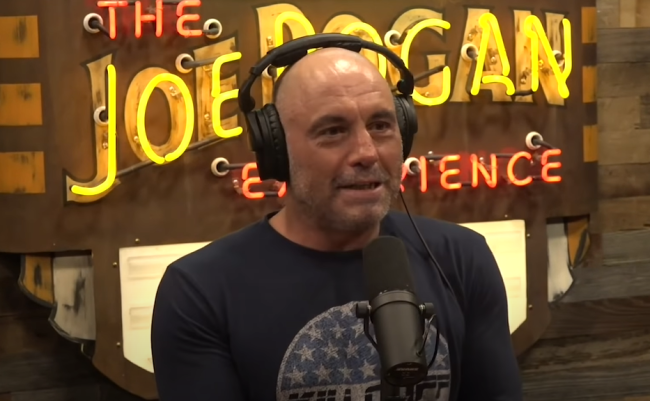 Joe Rogan slammed the mainstream media for attacking his treatment of COVID-19, most notably the use of the controversial drug ivermectin.

The most recent episode of The Joe Rogan Experience starts out with fellow comedian Tom Segura joking, “Well, if it isn’t ole ‘horse worm Rogan.'” Segura is making a reference to the media reports of Rogan taking the drug ivermectin, which has an oral paste to de-worm horses, as well as an anti-parasite medication for humans that has been distributed in approximately 3.7 billion doses to people in the past 30 years.

Rogan laughs and then asks, “Do I have to sue CNN?”

“They’re making sh*t up – they keep saying I’m taking horse dewormer,” Rogan said. “I literally got it from a doctor.”

“He’s promoting kind of a crazy jumble of, you know, sort of folk remedies and internet-prescribed drugs. It’s, again, dangerous now,” Reiner said. “He should have more sense after encountering the disease. And again, I hope he does well and gets well quickly. He’s not helping matters when he promotes this sort of nonsense therapeutic mix.”

“It’s an American company – they won the Nobel Prize in 2015 for use in human beings, and CNN is saying I’m taking horse dewormer – Jim Acosta,” Rogan says, making a reference to William C. Campbell and Satoshi Ōmura, who won the 2015 Nobel Prize in Physiology or Medicine for their “discoveries concerning a novel therapy against infections caused by roundworm parasites,” including ivermectin.

“Ivermectin was later tested in humans with parasitic infections and effectively killed parasite larvae (microfilaria),” the Nobel Peace Prize committee said in a 2015 press release. “Collectively, Ōmura and Campbell’s contributions led to the discovery of a new class of drugs with extraordinary efficacy against parasitic diseases.”

“What they didn’t highlight is that I got better,” Rogan noted. “They try to make it seem like I’m taking wacky sh*t that’s completely ineffective. CNN is saying that I’m a distributor of misinformation.”

“They must know that’s a lie,” Rogan continued, later adding, “If the internet is saying it, who cares? But CNN is saying it.”

Previously, Joe Rogan revealed that he was infected with COVID-19, and said he “Threw the kitchen sink at it.”

“I woke up in the morning, and I knew it,” Rogan said of his oncoming coronavirus “something’s going on, 90% sure it was covid.”

“I was taking vitamin IV drips every day – high-dose vitamin C, vitamin D, and NAD,” Rogan said when he first got the news of contracting COVID-19.

“And literally on Monday I felt pretty f*cking good,” he said.

Segura asked Rogan how he felt about people wishing he was dead because he took a coronavirus treatment that they didn’t approve of.

“Well, the good news is that I was only sick for a day,” Rogan replied. “Because I wasn’t scared during the entire pandemic, what they would like is that when I did get sick, that I was really sick, and became really scared and learned my lesson.”

“And instead it’s the worst-case scenario for them. I bounced back about as quick as you f*cking can,” Rogan continued. “They’re haters. But that’s their life. They have to live like that.”

Rogan added, “My message is: ‘Be healthy,’ and obviously there’s some merit to that.”

The FDA recommends that you should not use ivermectin to treat coronavirus.

India, Latin American, and Caribbean countries have prescribed ivermectin for the preventive treatment of COVID-19.