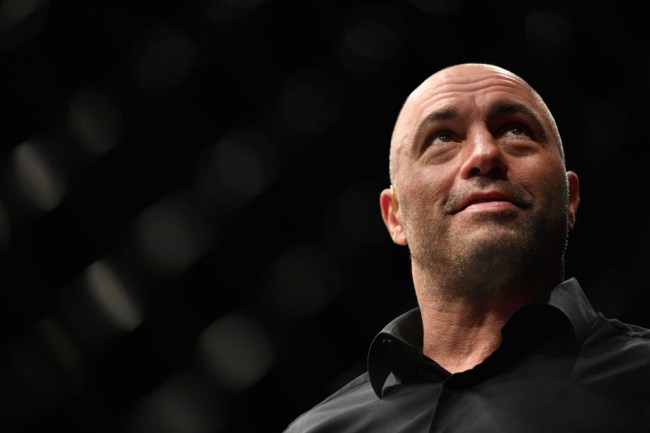 Before Joe Rogan was the host of his Joe Rogan Experience podcast that has nearly 7 million subscribers and over 1.6 billion YouTube views (Plus another 1.9 billion views on his JRE Clips channel), he was the host of the top-rated TV game show Fear Factor.

Joe hosted Fear Factor from June 11, 2001, until September 12, 2006, and then returned to host the reality TV game show from December 12, 2011, until July 16, 2012. Rogan, who had been a very successful stand-up comedian and was an actor who starred in the NBC sitcom NewsRadio. But it was his time on Fear Factor that made him a household name.

Hilarious comedian Tim Dillon was on the JRE recently, and they discussed Rogan’s time on Fear Factor and why it was a happy ending for Rogan who had become tired of the repetitive stunts.

“When I was like on season five of Fear Factor, I remember thinking, ‘I don’t know how much longer I can do this,'” Rogan reminisced. “It was the same thing over and over again. We did 148 episodes. After a while, it was like, ‘Jesus Christ how many animal d*cks can you serve people?'”

“I didn’t have as much money back then, and also, it was a lot more money than what I got the first time,” Rogan revealed. “It was a big deal, but I immediately regretted it.”

“I was just having children then,” Joe said. “I felt this overwhelming responsibility to squirrel away more money, but then once I started doing it, I was like, ‘Oh my God, this is a mistake.'”

Rogan then explains why Fear Factor was canceled. “Then we got canceled because we served people j*zz,” Rogan tells Dillon. “They had to drink donkey c**.” That blows.

Imagine hosting Fear Factor, and it goes off the air, then you go on a job interview where the HR manager asks the loaded question, “So, why did you lose your last job?”

“The show had to get more and more extreme, and it was very dangerous,” Rogan said. “It was freaking me out. They were taking a lot more crazy risks.”

The first person to get the key lock opened “goes shooting into the sky.” “What if something breaks. What if we watch someone fall to their death,” he said.

Rogan said he doesn’t feel morally wrong for hosting a reality TV show that put people’s lives in danger because he too would have been a contestant on the show when he was broke. “I would have eaten an animal d*ck, I would have let you throw puke in my face,” Rogan joked.

In another episode of JRE with comedian Christina Pazsitzky, Rogan said he got the Fear Factor hosting duties because he took the show as a joke. “The reason why I got the gig is because I made fun of it,” Joe said. “I came into this meeting, I was high as f*ck.”

Rogan knew the death of the show was coming in his first meeting with NBC executives. “This is the most insane idea for a television show that I’ve ever heard, this is going to be canceled immediately,” Rogan told the NBC executives.

Rogan then discussed the infamous donkey episode of Fear Factor that got the reality TV series canceled. The episode titled “Hee Haw! Hee Haw!” and known on the internet as the “Donkey Juice” episode had contestants play a game of horseshoes. The farther their horseshoes were from the stakes, the more ounces of donkey semen and donkey urine they had to drink. One poor girl had to drink 30 ounces of donkey semen.

The episode was scheduled to air the stomach-churning episode on January 30, 2012, but ended up pulling the nauseating episode after photos of the stunt were published by TMZ.

“What happened was, the TMZ folks got ahold of the pictures of these people drinking c** early,” Rogan told Christina P. from the Your Mom’s House podcast. “And it became this giant fear.”

“So hard to imagine that this was a real show,” Rogan said. “That episode killed it.” The inevitable death of Fear Factor came in July 2012.

Fear Factor was revived by MTV in 2017 where Ludacris is now the host. The show’s YouTube channel has clips from current and past NBC Fear Factor shows.

You can watch the Joe Rogan Experience shows with Tim Dillon and Christina Pazsitzky in their entirety below.