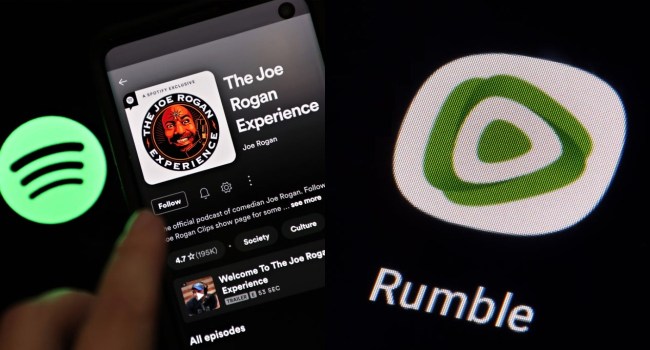 In the midst of multiple controversies, Joe Rogan’s future with Spotify is more in doubt than it’s ever been.

While CEO Daniel Ek recently said that he does “not believe that silencing Joe is the answer,” the company has scrubbed a total of 113 episodes of The Joe Rogan Experience from their platform due to comments he’s made or guests he’s hosted.

Over the weekend, Spotify deleted 71 episodes of the wildly popular podcast following the latest Rogan-related controversy, which began after musical artist India.Arie shared a compilation video of Rogan using the N-word and using “Planet of the Apes” to describe Black people. In response to the video, Rogan posted an apology on Instagram where he called his frequent use of the N-word as “the most regretful and shameful thing I’ve ever had to talk about publicly.”

Obviously sensing that Rogan’s future is more in question than it’s ever been since he signed a deal with Spotify in the neighborhood of $100 million back in 2020, Rumble — a Candian social media service that describes itself as a “YouTube alternative” — has offered the 54-year-old podcaster, stand-up comedian, and UFC commentator $100 million (over four years) to bring all of his show (“old and new”) exclusively to the platform.

“We stand with you, your guests, and your legion of fans in desire for real conversation. So we’d like to offer you 100 million reasons to make the world a better place,” an open letter from Rumble CEO Chris Pavlovski reads.

“How about you bring all your shows to Rumble, both old and new, with no censorship, for 100 million bucks over four years. This is our chance to save the world, and yes, this is totally legit.”

Hey @joerogan, we are ready to fight alongside you. See the note from our CEO @chrispavlovski… pic.twitter.com/G7ahfNNjtP

What is Rumble, exactly? According to its official description on the Apple App store, it’s a “YouTube alternative” and “a place where you can grow followers faster, have a search and related videos that don’t preference channels, monetize your videos, and watch your favorite creator.”

RELATED: The Rock Walks Back Previous Defense Of Joe Rogan Following Revelations Of His ‘N Word Use’