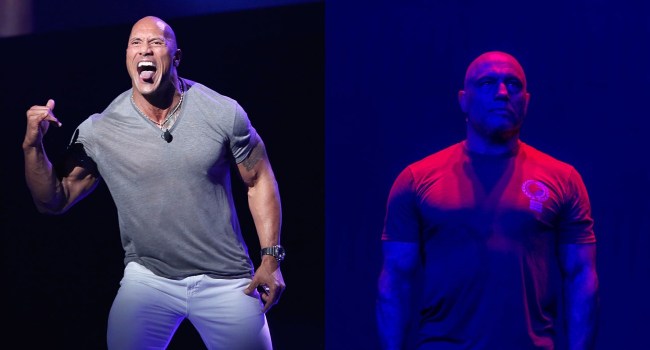 It’s been quite a busy few weeks for Joe Rogan, who finds himself broiled in yet another massive controversy, this time over his use of the N-word on his podcast.

Last week, musical artist India.Arie shared a compilation video of Rogan using the N-word and using “Planet of the Apes” to describe Black people. Subsequently, 71 episodes of The Joe Rogan Experience were removed from Spotify. In total, 113 episodes of the hit podcast have been scrubbed from Spotify.

After removing her music from @Spotify, @indiaarie has doubled down on her decision alongside clips of @joerogan using racist language: "They take this money from music streaming and pay this guy $100million and pay us .003% of a penny [per stream]? Just take me off!"

In (yet another) Instagram apology, Rogan categorized his frequent use of the N-word as “the most regretful and shameful thing I’ve ever had to talk about publicly.”

The latest Rogan controversy has also gotten Dwayne Johnson involved, as the famed actor had to walk back his previous defense of Rogan. The Rock had previously showed public support for Rogan following his statement on the Neil Young controversy, telling Rogan that he thought his apology was “great stuff” and “perfectly articulated.”

Responding to a tweet from author Don Winslow, The Rock said:

“Thank you so much for this. I hear you as well as everyone here 100%. I was not aware of his N-word use prior to my comments, but now I’ve become educated to his complete narrative. Learning moment for me. Mahalo, brother and have a great & productive weekend.”

Dear @donwinslow
Thank you so much for this
I hear you as well as everyone here 100%
I was not aware of his N word use prior to my comments, but now I've become educated to his complete narrative.
Learning moment for me.

Mahalo, brother and have a great & productive weekend.
DJ https://t.co/3mBf85wRoe

In a statement, Spotify CEO Daniel EK — who was already forced to release a statement in regards to the Neil Young controversy — said that Rogan’s language “do not represent the values of this company.” Spotify signed Rogan to a deal in the neighborhood of $100 million back in 2020.

“Not only are some of Joe Rogan’s comments incredibly hurtful — I want to make clear that they do not represent the values of this company,” Ek said in a memo. “I know this situation leaves many of you feeling drained, frustrated and unheard.” [via The Verge]

Despite this, though, Ek reiterated that he does “not believe that silencing Joe is the answer.” What that really means, though, is that Ek believes Rogan is making Spotify more money than he’s costing them.