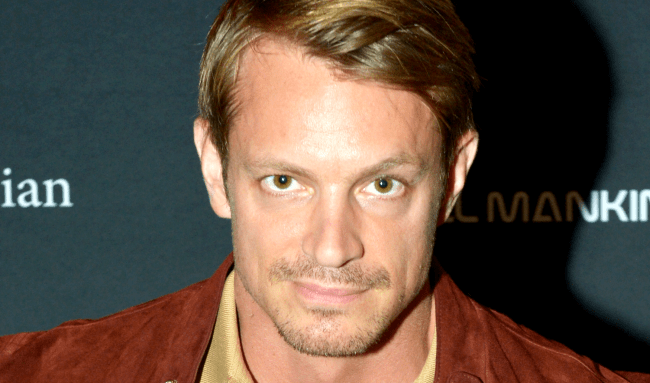 The Suicide Squad and Altered Carbon star Joel Kinnaman was granted a restraining order against Swedish model Gabriella Magnusson, who also goes by the name Bella Davis, late last week and the story behind why he felt the need to get it is wild.

According to court documents acquired by TMZ, Kinnaman claims he met Magnusson back in 2017 and they had a “brief romantic relationship.”

Now, he says, she is “using harassment, threats of physical violence by herself and others, and threats to disseminate false information to extort money from [him].”

Kinnaman, who is engaged to former Victoria’s Secret model Kelly Gale, claims that after he and Magnusson had sex in December of 2018 she got angry with him because he didn’t let her stay at his place overnight and didn’t check with her to make sure she made it home safe.

He says after that encounter, she sent him sexually explicit videos of herself in 2019 and 2020. He says he did not respond and blocked her. Kinnaman says that made her angry and she tried contacting him using other peoples’ phones and became increasingly confrontational.

According to the docs, obtained by TMZ, she threatened to publicize false information — specifically, that they had sex against her will in December, 2018, unless he gave in to her financial demands.

Kinnaman says he tried resolving things last month when his manager was meeting with Magnusson and her brother, who was carrying a rifle. He says during that conversation, she admitted the sex wasn’t against her will but she was upset with the way he treated her. She mentioned the sex was so rushed she kept her shoes on and was then shown the door.

Joel Kinnaman also claims Magnusson told him she was a member of the Crips, knew people like Chris Brown, LeBron James and Lil Wayne, that her friends would “f–k” his life.

The 41-year-old actor also made a statement on the matter on Instagram which read, “Earlier this morning, I filed for a restraining order against a woman who has been threatening me and my family and loved ones, attempting to extort money and other things of value from me.

“While it is mortifying and scary to come forward about all of this, what feels worse is enduring the escalating daily threats of physical harm to me and my loved ones and threats to go to the press with fabricated, vile rumors unless I agree to a list of demands that includes money, Hollywood connections, helping to secure a work visa, a verified Instagram page, a Wikipedia page, a photoshoot with Sports Illustrated, an additional $400,000 USD for an apartment and more.

“And so, I want to share the facts with you, honestly and directly:

“In late 2018, when I was single, I had a brief romantic relationship with a woman named Gabriella Magnusson, a Swedish model who goes by the name of Bella Davis. In November 2018, we met up in New York and had consensual sex. The next month, in December 2018, we met up again and had consensual sex but did not spend the night together because I had to get up early the following morning for work.

“The next day she texted me that she was bothered that I had not asked her to spend the night and that I did not check with her to make sure she made it home safely.

“In 2019 and 2020, Bella resumed contact with me, asking to meet up and sending sexually explicit content, but I was in a relationship at this point, so I did not respond. Given her increasingly obsessive communications, I felt it was best to cut off all communication with her. But Bella continued to try to communicate with me-texting and calling from other people’s phones — and these communications became more and more antagonistic, threatening, and frightening over time.”

He continued, “Hoping to resolve this situation, on July 25, I had a lengthy telephone conversation with Bella, which she knew was being recorded. In that taped conversation, Bella more than once acknowledged that the sex was consensual. In that same conversation, she reiterated her threat to tell the media that it was against her will unless I met her demands. At one point, she stated, ‘Do you know how much money I would get and how famous I would be if I went to the press?’ She also made threats of physical violence against me and my family by herself and others, including her brother, a convicted felon, who pointed a rifle at my manager.

“Since then, her threats of violence against me and my loved ones have become so serious and specific that I felt I had no choice but to seek a restraining order.”

Magnusson, AKA Davis, disputed Joel Kinnamen’s claims by posting a series of texts and audio from a Zoom call that she alleges proves the actor is lying.

“Lol ‘restraining order’ where is it? Was it because I told u yesterday I going to the cops and don’t wanna sign ur contract? Stop lying I don’t even have an restraining order and don’t worry I not wanna breath the same air as you idiot!” she wrote in the caption of one post about the story.

““Bella Davis’ allegations with specific evidence” where ur EVIDENCE JOEL? See u in court!” she captioned another post.

“joelkinnaman raped me twice and they try to silent me @orlandojohn was aggressive and OFFER me and nda [sic] I (NEVER SIGN)to be silent so good luck with all the lies,” Davis wrote in another. “Stand for what u did joel u even cried on phone begging me to not tell anyone last week!”

Meaww, which translated some of the texts that were written in Swedish (Kinnaman speaks the language), reports…

In another exchange, that appears to be on Instagram, Kinnaman says “would like to meet you.” In response, Magnusson asks “Did you think you were getting married?” Again, without context, it is unclear what exactly is happening but the thread ends with Kinnaman saying he looks “forward to meeting” Magnusson. In another two posts, Magnusson uploaded audio of an exchange between her and Kinnaman. Along with the audio, she alleges “The second time we meet up he raped me,” in one post, and “I hate that men coming away with rape I hope u going to jail you liar,” in another.

Furthermore, Magnusson alleges Kinnaman’s lawyer paid her lawyer 2,250,00 SEK (Swedish Kronor) or around $25,987. She also says Kinnaman and his lawyer wanted her to sign an NDA “to be silent”. She also uploaded a video of an encounter with Kinnaman’s agent Orlando John, where she accused him of “touching my brother”. When confronted, John simply says “I don’t want to argue.” In another post, she says “U even cried on phone begging me to not tell anyone last week!” and uses the #MeToo.

It is currently unclear if Magnusson has spoken to police, but she did tell People in a statement that she denies having “ever threatened or asked for money” from Joel Kinnaman.