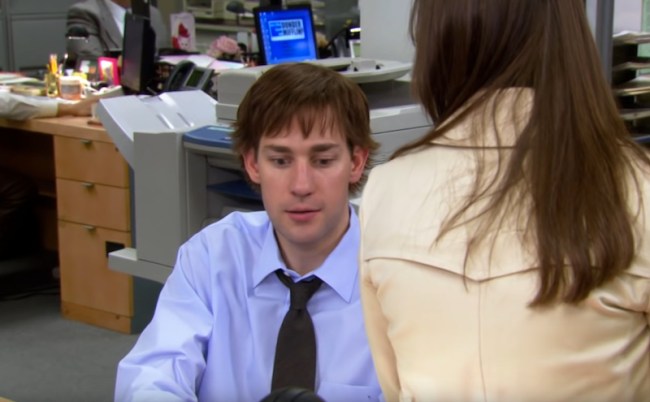 John Krasinski had a very distinct hairstyle on “The Office.” We can all envision Jim Halpert’s hair.

A few words that spring to mind are unkempt, moppy, and Bieberish. Bieberish isn’t a word but you absolutely get the reference.

One word that doesn’t come to mind is “fake” but in a recent interview with Mashable, the hairstylist on “The Office” admitted that for at least one season, Krasinski wore a wig to pull off Halpert’s iconic look.

Kim Ferry explained that the reason for the wig was because Krasinski wanted to take a movie role that involved shaving his hair short.

Ferry helped Krasinski convince showrunner Greg Daniels to allow the actor to cut his hair to star opposite George Clooney in the 2008 film, “Leatherheads.”

Being in the film meant Krasinski would have to cut his hair before filming the final six episodes of Season 3 of “The Office.”

Daniels shut down the request “immediately”, according to Ferry.

“He paid for the wig — a human hair wig made by a friend of mine, Natascha Ladek, who’s the best wig maker in town,” Ferry said, adding that the pair’s plan was a daunting one that made her feel like her job was being put on the line. “She came in to do a secret little fitting for him, she made the wig, we got it, and it looked amazing. [Krasinski] came in a little later that day, and I had the wig hidden in a little secret spot ready for him. When it was just him and I, I put it on him, and then he went out and filmed.”

Ferry said she followed Krasinski, who was still wearing the wig, to Daniels’ office and nervously waited outside. While waiting for Daniels’ reaction, Ferry said writer and actor BJ Novak (Ryan Howard) walked by her and asked if she was waiting to hear about whether she could cut Krasinski’s hair. Ferry remembers Novak telling her, “Well, I’ve gotta tell you… I just saw John and I feel like we’re gonna know if it’s a wig or not.”

Krasinski went into Daniels’ office one more time – wearing the wig – and begged him to be allowed to cut his hair. Daniels said he’d absolutely know if Krasinski had a piece on, to which the actor replied, “no you wouldn’t” and ripped off the wig to reveal it was a fake.

Daniels allowed the haircut and wig.

Thanks to IMDB, it’s simple to figure out which episodes involve Halpert’s hairpiece. The final six episodes of Season 3 include The Negotiation, Safety Training, Product Recall, Women’s Appreciation, Beach Games, and The Job.

In “Product Recall”, the episode begins with Jim impersonating Dwight. Krasinski is wearing a wig in the scene.

Krasinski is also wearing a wig during Roy’s attack at the beginning of “The Negotiation.”

Well, we were all fooled.

Ferry is also credited with Michael Scott’s transformation from his slicked back, almost balding dome, and even figured out a way to make it look like Meredith (Kate Flannery) shaved her lice-infected head during Season 9 without really shaving her head (which Daniels insisted on doing).