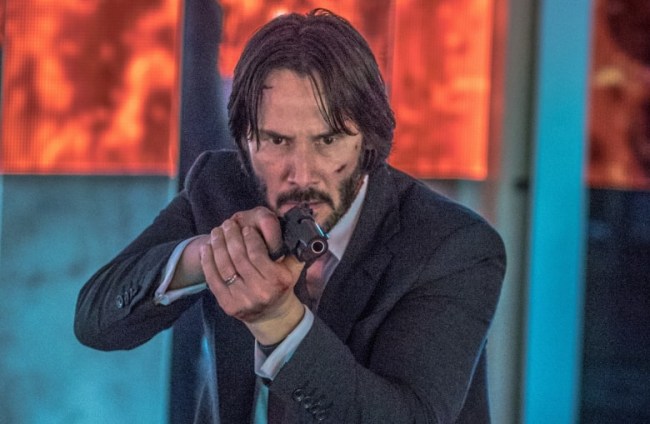 John Wick 3 finally has an official title. After John Wick: Chapter 2, the third installment of the cult assassin flick will ditch the “chapter” and be titled John Wick 3: Parabellum according to the movie’s star. Keanu Reeves gave an interview to Coming Soon where he revealed the official title and explained what it means.

When asked whether the title for the upcoming chapter would be John Wick 3 or the rumored Parabellum, Reeves responded, “It’s both! John Wick 3: Parabellum.” Reeves explained what the classical Latin phrase means. “Prepare for war. It’s part of that famous sentence, ‘Si vis pacem, para bellum,’ which translates as, ‘If you want peace, prepare for war.’”

John Wick is always prepared for war. Especially when there is a bounty on his head by an army of assassins after breaking the sacred rules of not conducting business on the grounds of the Continental hotel. Joining Reeves are newcomers Halle Berry, Angelica Huston, Asia Kate Dillon, Mark Dacascos, Jason Mantzoukas, Hiroyuki Sanada, Boban Marjanovic, as well as Ian McShane, Laurence Fishburne, Common, Lance Reddick, and Ruby Rose reprise their roles. Derek Kolstad and Chad Stahelski are returning to write and direct John Wick 3: Parabellum and make sure that there is non-stop bullet-whizzing action.

Besides the upcoming third movie, there will also be a spinoff TV show titled The Continental on STARZ with Chris Collins from Sons of Anarchy as the executive producer. John Wick 3: Parabellum launches into theaters on May 17, 2019.