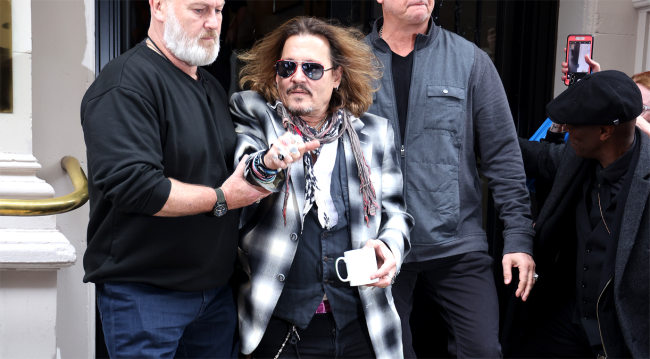 The verdict in the wild Johnny Depp vs. Amber Heard trial may have been “unexpected” and “strange,” but it was very fitting. After all, the entire trial was filled with the unexpected and strange.

Following his big win in which he was awarded a $10.35 million judgment against his ex-wife, Johnny Depp issued a statement saying that he was “truly humbled” by the jury’s decision.

So while Amber Heard’s lawyer claimed after the verdict that she “absolutely” cannot afford to pay the court-ordered damages (despite the fact that she reportedly stayed in a $22k per month Virginia mansion during the trial, Depp celebrated by spending more than $62,000 on a dinner with friends in Birmingham, England.

Depp and friends celebrated his victory with a feast of “authentic Indian cuisine” including shish kebabs, chicken tikka, paneer tikka masala, lamb karahi and tandoori king prawns, as well as cocktails and rosé Champagne at the Varanasi restaurant, reports the New York Post.

The staff at the restaurant said Depp was a “very lovely, down-to-earth bloke” as Varanasi Operations Director Mohammed Hussain told TMZ that the actor is an extremely humble guy after the two of them spoke in his private office.

“He spent a lot of time speaking with the staff, our friends and family and was happy to pose for pictures with them,” said Hussain. “You would never have thought that he was such a big star. He had a lot of time for us all.”

The 20,000-square-foot restaurant was completely shut down for Depp and his pals, according to Hussain.

“We had a call out of the blue on Sunday afternoon saying that Johnny Depp wanted to come to eat with a group of people,” Hussain told the Daily Mail. “I was shocked, and at first, I thought it might have been a wind up [joke]. But then his security team arrived [and] checked out the restaurant, and we let them have the whole place because we were concerned that he might be bothered by other diners.”

Hussain added that the restaurant made more money from Depp’s dinner than it did from its busiest night of the week “when we have around 400 diners.”

Considering the average salary for a worker in the United States in 2020, according to the Bureau of Labor Statistics, was $56,310, that is certainly an understandable claim.

Depp has been in England hanging out with his friend, musician Jeff Beck, and even appearing on stage during several of Beck’s concerts on his latest tour.