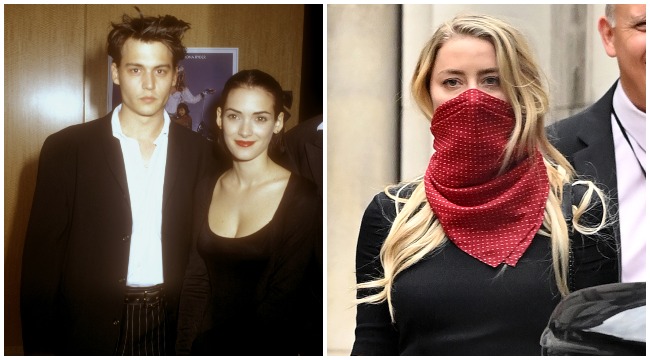 Johnny Depp’s libel trial in England is going as expected for anyone who’s followed the menacing dumpster of a relationship the 57-year-old actor shared with Amber Heard.

Just yesterday, news broke that Depp allegedly decided to divorce the actress after she pooped in their marital bed ‘as a prank,’ just one destructive incident in an endless string of them during their 15-month malevolent matrimony.

A meticulous colonoscopy of their relationship also produced the alleged fallout from Depp’s “Wino Forever” arm tattoo, ink that originally read “Winona Forever,” an ode to Winona Ryder, his fiancee for three years in the early 90s.

Depp was accused of slapping Heard three times for mocking the cheesy tattoo and attempting to torch a painting by her ‘lesbian lover,’ Daily Mail reports.

“You then, Mr Depp, slapped Ms. Heard across the face,” [lawyer] Sasha Wass told him in court, the outlet reported.

Depp called it “patently untrue,” insisting, ‘That is not correct, it’s untrue. It didn’t happen.”

After his attack, Depp “started crying and started apologizing” and promised never to hit her again, blaming a “sickness” within him, Wass said, according to the Evening Standard.

Another bizarre allegation made against Depp involved Pistol, Heard’s little Yorkshire terrier, who Depp angrily held outside the window of a moving car.

Ms. Wass said: ‘And you took hold of Pistol and you held her out of the window and started making howling noises.’ The actor responded: ‘I can say it is a very endearing image, but it is absolute utter falsity, it is fraudulent.’

The barrister then suggested Depp thought this was funny, to which he responded: ‘No ma’am, I don’t think hanging an animal, a small defenseless dog that weighs three pounds out of a window is fun.’

Ms Wass then asked if Depp had laughed at a suggestion of the dog being put in a microwave, to which he replied that was a ‘running joke’ between himself, Heard and others.

These anecdotes are just the tip of the shitberg. Head over to Daily Mail to read Depp talk about his drug use, trashing a New York hotel room to the tune of $10,000 in damage, threatening photographers with a plank, River Phoenix’s drug death, and how Elton John helped him get sober.