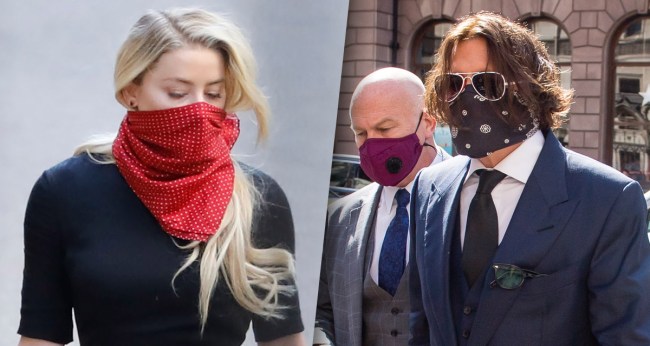 Johnny Depp’s long-awaited libel trial in England has officially begun, and it is going to be so, much, fun.

It’s just day one, but his ex-wife Amber Heard is already getting lambasted by Depp’s attorneys.

Honestly, I am not even sure which trial this is, Depp has been involved in so many bizarre, yet similar lawsuits over the past few years. I don’t think this is the $50 million defamation suit against Heard. That’s still to come.

Or is this the one where Heard allegedly slammed a door in Depp’s face before clocking him in the jaw?

I know he already settled that other $50 million lawsuit for malpractice against his former lawyers.

It’s all so very confusing, but regardless, this is going to be entertaining as hell to watch unfold.

Remember, this is DAY ONE.

The Daily Mail, which is covering the trial over in England, filed this report…

Johnny Depp today claimed he decided to divorce Amber Heard after she defecated in their marital bed ‘as a prank’ as he denied hitting her and said that she had abused him throughout their marriage.

The Hollywood legend, 57, is suing The Sun for labeling him a ‘wife beater’ and today branded those accusations ‘sick and completely untrue’ at a long-awaited blockbuster libel trial at the High Court in London.

But the most sensational revelation from Depp was that he decided to divorce Heard after faeces was left in their bed.

The actor said Heard or ‘possibly one of her friends’ was responsible for the incident, but claimed she dismissed it as ‘just a harmless prank’, and he agreed when asked if it was the final straw in their deteriorating marriage.

He took the stand today to deny ever hitting Heard, as a series of newspaper stories alleged, and said it was ‘inconceivable’ that he would ever hit a woman, citing his Southern upbringing and saying he considers chivalry ‘very important’.

Okay, so this lawsuit is against The Sun. Not sure I even knew about that one.

During his testimony, Depp also accused Heard of being a “calculating, narcissistic sociopath” who married him just to further her acting career. If true, it certainly didn’t work.

Keep in mind, they were married for less than two years, and from the moment they got married to the day Heard filed for divorce was a grand total of 475 days. How they ever even made it that long without killing each other is a mystery.

Depp’s attorneys also submitted a photo of the actor after his thumb was allegedly severed in an attack by Heard when she threw a bottle of vodka at him after he asked her to sign a post-nuptial agreement resulting in him almost dying from MRSA.

“If I had known then what I know now, I would have seen the red flag warning signs, but I did not,” Depp stated in court on Tuesday. “She was beautiful, seemingly incredibly interested in me and my work, and I fell for it. She bombed me with what appeared to be love.

“It was not until much later that I understood that she had an agenda, namely to get married to me in order to progress her own career and/or to benefit financially, and she knew how to bring it about.

“For example, at the time, she repeatedly told me how much she admired my films; however, later in our relationship she admitted that she had never seen any of my films. She knew what she wanted and I was an easy target.”

He added that their time as a couple was “incredibly unhappy” and stated, “She is a calculating, diagnosed borderline personality; she is sociopathic; she is a narcissist; and she is completely emotionally dishonest.”

He went on to say that she called him a “pussy” and “spineless” for running away from fights with her.

In an audiotape played in court, Heard could be heard calling Depp a “f***ing baby” and telling him to “grow the f**k up.”

Depp also talked about his past drug use, admitting he’s taken “every drug known to man” and the testimony even went as far back as him trashing a New York hotel room in 1995 while with then girlfriend Kate Moss and the death of actor River Phoenix which occured in 1993 outside the Viper Room nightclub he owned.

And all that wasn’t even the half of it. For the full, amazing story of DAY ONE of Depp’s libel trial against The Sun, head over to the Daily Mail.