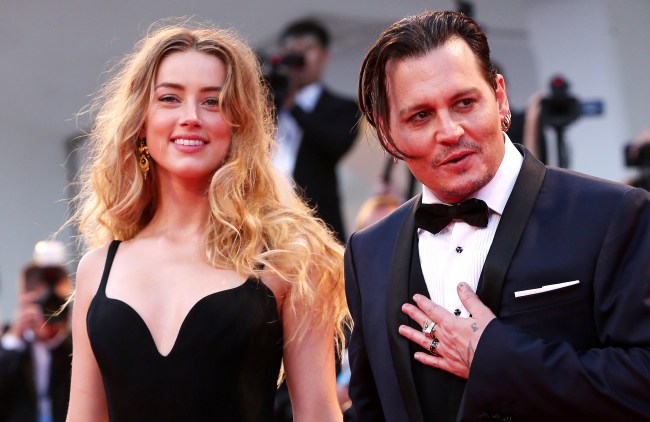 The latest news to come out of the never-ending legal battle between onetime married couple Johnny Depp and Amber Heard is quite a doozy.

So they were married for less than two years, and from the moment they got married to the day Heard filed for divorce was 475 days.

This is important because, again, they were literally a married couple for about a year and three months, and yet we’ve got all of this…

And that’s just about the half of it. There was also the Billy Bob Thornton rumor where Depp allegedly cut off his fingertip in jealous rage after accusing Heard of cheating, the video of an enraged Depp going off on Heard and smashing a wine bottle, Depp allegedly hitting Heard in the face with an iPhone, and so much more.

Josh Drew — the ex-husband of Raquel “Rocky” Pennington, Heard’s best friend — contends that Musk, 48, slept with Heard and Delevingne at Depp’s LA penthouse in late 2016 following Heard and Depp’s split. (The pair divorced in May of that year.)

Drew was, at the time, living rent-free in one of Depp’s other apartments near the penthouse in downtown LA, and has continued to socialize with Heard as of last year. The “Aquaman” actress is reportedly also paying for his attorney as well.

“Cara could also be compelled to give evidence — by either party,” the Mail quotes a source as saying. “It’s definitely a possibility. Almost anything can happen in this case.” Actor James Franco has also been subpoenaed for any materials related to Heard, as has Musk.

Drew claims that the affair occurred while Heard and Depp were married; Musk insists the pair only got together after her split from Depp. The “Fantastic Beasts,” actor, meanwhile, cites building staff who say Musk visited Heard “late at night” while Depp was abroad filming “Pirates of the Caribbean” in 2015.

According to a deposition seen by the Daily Mail, Drew gave the following testimony…

‘Did Rocky tell you Amber Heard was having an affair with Carla Delevingne while she was still married to Johnny Depp?’ attorney Benjamin Chew asks.

‘Yes,’ says Drew, who has since split from Pennington but says elsewhere in the deposition that he socialized with Heard as recently as last year and that she is paying for his attorney.

‘Did she ever tell you in words or substance while Amber was still married to Johnny Depp that the three of them, Amber Heard, Elon Musk and Carla Delevingne spent the night together?’ Chew goes on.

Chew further asks: ‘So they were having a three-way affair, correct?’

All of this dirt being spilled by both parties and they were together as husband and wife for 475 days. Amazing.