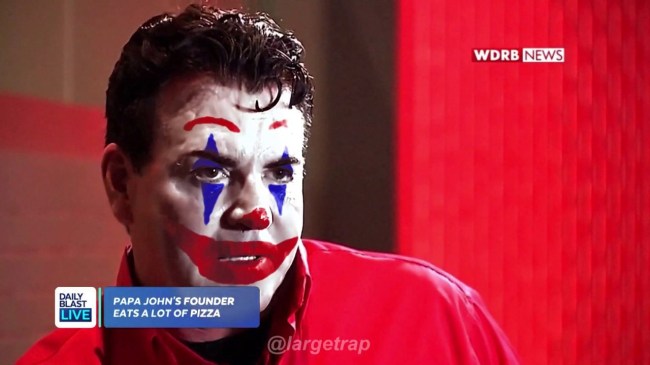 Back in November of 2019, disgraced Papa John’s founder John Schnatter did an interview with WDRB News which, in addition to sounding completely unhinged, he looked like he’d just got done swimming in a pool of his restaurant’s famous garlic sauce.

It was absolutely electric.

During the interview, Schnatter claimed, among many things, to have eaten over 40 pizzas in the past 30 days.

He also admitted using the N-word during a 2018 conference call, but said it was to show how much he hated racism and accused the board of directors and people who took over leadership of Papa John’s of using “the black community and race as a way to steal the company.”

“This is all a farce,” he told WDRB about his being ousted from the company he founded. “Nothing sells like the truth, and the truth, sooner or later, all comes out.”

What actually turned out to be a farce was Schattner’s claim that he housed 40 pizzas in a 30 day period.

Fast forward to today and somehow, Schnatter’s unhinged interview from November of 2019 has been made even more mesmerizing… by adding Joker paint to his face.

I don’t know about you, but I am thinking director Todd Phillips has found his Joker sequel.

Even The Clown Prince of Crime himself can’t top that.