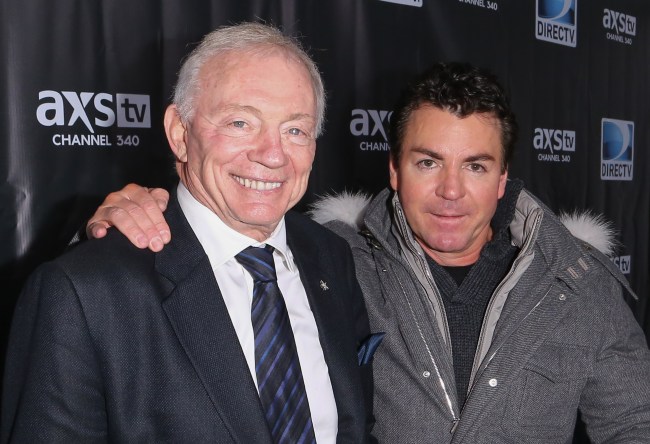 I cannot stop watching this interview with disgraced Papa John’s founder John Schnatter. There are so many unanswered questions. And I’m not just talking bout the questions I have, I’m wondering why he tried to big league the guy interviewing him and come off as a hard-o instead of just answering the questions.

The questions I have include why in the heck does he look like he just took a shower and then immediately put on clothes for this interview? The guy looks soaked. Is that perspiration? Is it some hair product left over from the 1980s that he’s been stockpiling?

The clips from this interview which you can find in full below are so far out there I’m not even sure where to begin with this. But let’s start with this clip that’s gone viral on Twitter overnight:

Dude, what? You’ve eaten over 40 pizzas in the past 30 days? Is that why you look soaked like you just walked in from a hurricane?

He sat with WDRB News for the interview and alludes to some grand comeback after being ousted from his own company in the fallout from the May 2018 conference call. He also seems to be holding a lot of grudges:

“I never dreamed that people that I cared about, that I loved, that I made multimillionaires, would do what they did,” Schnatter said.
In an exclusive interview with WDRB News, Schnatter said the May 2018 conference call that started it all was made up.
“They fabricated it,” he said. “Shame on them.”
Schnatter admitted he used the “N word” during an internal conference call on diversity training. But he said he did it to convey his hatred of racism and was quoting another famous founder.
“This is all a farce,” he said. “Nothing sells like the truth, and the truth, sooner or later, all comes out.” (via WDRB)

I’m gonna tell my kids this is Papa John. pic.twitter.com/RHyVADEYW5

papa john is clearly on what we call the “elvis life trajectory” where you rule the world for a decade or two then turn into a disgusting sweaty monster who gets winded from watching sports https://t.co/YRQHiJlsnH

John Schnatter goes on to say that the person who he handpicked as his replacement on the Papa John’s board stole his company and destroyed it. Some seriously bold claims from a man who has all but disappeared from the public eye for the past year after he admitted to using the n-word on a diversity training conference call….

“”Steve Ritchie, Olivia Kirtley, the board of directors all used the black community and race as a way to steal the company,” Schnatter said. “They stole the company, and now they’ve destroyed the company.”
Ritchie was Schnatter’s handpicked replacement, but after years of friendship, the two are now estranged. Kirtley is a Papa John’s board member.
“Olivia Kirtley and Mark Shapiro should be in jail. It’s that bad,” Schnatter said. “What they’ve done is just wrong, and they’ve hurt a lot of people.”

You: why is Papa John sweating grease?

You: ok that tracks https://t.co/XTSOj5Gal6

“He has no pizza experience” he claims, as if making pizza is some sort of prerequisite to running a company that probably never requires you to step foot in a single kitchen at any point in your career.

Something about this interview is addictive. You can find the full interview here on WDRB if you want to watch it in full but I’ll warn you that you might not be able to stop watching.