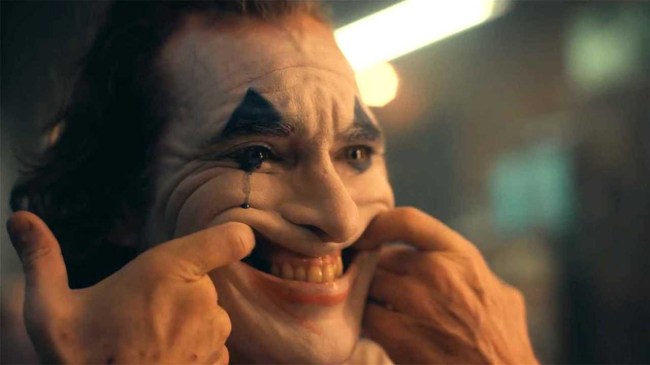 Yes. YES, boys! We’ve done it! Finally, the studio powers that be haven’t meddled with a movie to make it as marketable as possible. Finally, Hollywood is seeing the power of the “Logan treatment”. Finally, we know what Joker is going to be rated.

With just over a month until Joker is released in theaters on October 4, The Motion Picture Association of America has given the film its official rating… and that rating is R!

According to The Motion Picture Association of America, Joker has been given an R-rating due to “strong bloody violence, disturbing behavior, language, and brief sexual images”, and if you’re a fan of the infamous Clown Prince of Crime, that’s exactly what you want to hear.

While Joaquin Phoenix’s version of the Joker is set to be its own, new, unique version, its important to remember that the Joker is a character who literally once beat Robin to death with a crowbar and sexually assaulted Barbara Gordon after paralyzing her from the waist down — the man is a walking R-rating.

So, making a film about such a vile character and having it be rated anything less than R would have been a disservice to the most iconic villain in the history of comic books.

Luckily, Warner Bros. didn’t meddle in the vision that director Todd Phillips was trying to craft, and as a result, Joker has been given the R-rating it deserves. Given the success of 2017’s Logan, it’s no longer a stretch of the imagination to see a gritty comic book movie with an R-rating succeed. And trust me, with a budget of just $55 million, not only is Joker shaping up to be a critical darling, but also extremely profitable.

Joker, which features Phoenix as failed comedian Arthur Fleck in the 1981 Gotham City, also stars Zazie Beetz, Robert De Niro, and Frances Conroy. It is set to be released in theaters on Friday, October 4.

More: Joaquin Phoenix Explains Why He Was Originally Hesitant To Star As The Joker

More: The Producer Of ‘Joker’ Says It’s ‘Unlike Any Comic Book Movie’ And We’re Officially All In