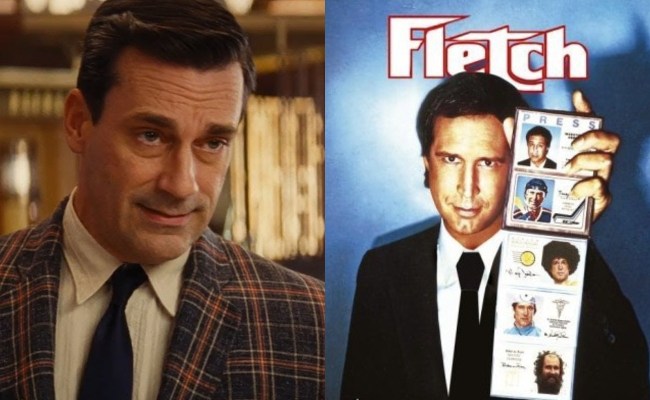 Jon Hamm, man — what’s his deal? Just feels like he should have bee a bigger star. Dude crushed Mad Men in the prime of his career, won an Emmy, and then transitioned to being the B-star in solid if not great movies like The Town, Baby Driver, Richard Jewell, and an upcoming appearance in Top Gun: Maverick. Essentially, he’s a character actor that just so happens to look like Bruce Wayne.

Still, with his acting pedigree, aggressively square jaw, and undeniable A-List charm, Hamm will always be given the chance to be a leading man in his own vehicle, which seems to be the case with the upcoming reboot of Fletch, which originally starred Chevy Chase back in the 80s.

Jon Hamm will star in and produce a new feature film about the brazen investigative reporter to be directed by Superbad‘s Greg Mottola and hail from Miramax. The movie, like the Chevy Chase films in the 1980s, is based on Gregory Mcdonald’s 1970s and 1980s Fletch mystery novels.

The new film adaptation will specifically be based on the second book in the Mcdonald series, Confess, Fletch. In a mysterious chain of wild events, Fletch finds himself in the middle of multiple murders — one of which pins him as a prime suspect. While on a quest to prove his innocence, Fletch is tasked with finding his fiancée’s stolen art collection, the only inheritance she’s acquired after her father goes missing and is presumed dead. [via Deadline]

I think I’ve seen Fletch, once, back in the 90s, probably sitting on the couch with my Dad. If Tom Hanks is the current Reigning Champ of Dad Movie Dramas, then Chevy Chase is the Reigning Champ of Dad Movie Comedies — something about him and all of his iconic roles just make me think of a Dad, taking a nap on the couch on a Saturday afternoon with a half-drank beer on the coffee table and grass stains on his jeans from mowing the lawn earlier in the morning. Will Jon Hamm be able to bring that sort of BDE (Big Dad Energy) to Fletch?