You Know That 9/11 Bill Jon Stewart Has Been Fighting For? Congress Passed The Sh*t Out Of It 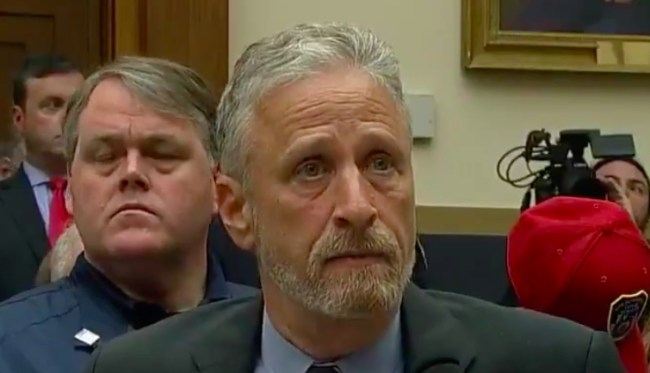 A day after Jon Stewart, aka America’s Conscience, absolutely lit into Congress for their handling and treatment of 9/11 first responders — literally some of the bravest people walking this country — the House Judiciary Committee passed the 9/11 Victim Compensation Fund bill unanimously on Wednesday morning.

The bill, which is sponsored by Rep. Carolyn Maloney (D-N.Y.), will permanently authorize the 9/11 Victim Compensation Fund, which is “aimed to provide necessary financial support for the thousands who suffered serious medical issues, including a spate of cancer diagnoses”, according to CBS News.

The fund, which was originally signed into law as a part of the 9/11 Health and Compensation Act of 2010, had been reauthorized for 90 years as recently as 2015.

However, the key component of the law — the aforementioned 9/11 Victim Compensation Fund — was only given five years worth of funding until the year 2020.

While the bill has been unanimously approved by the House Judiciary Committee, it still needs to be “scored by the Congressional Budget Office before it can get a full vote in the House,” the New York Post reports.

The rest is just a formality at this point, though, as the legislation currently has 313 bipartisan co-sponsors, making it an essential shoo-in to be passed, says the Post.

Jon Stewart: "What an incredible metaphor this room is for the entire process that getting healthcare and benefits for 9/11 first responders has come to … a filled room of 9/11 first responders and in front of me, a nearly empty Congress" https://t.co/vSFOq0Kl2v pic.twitter.com/4ezCiyc3Fs

During his June 11 speech in front of Congress, Stewart absolutely tore into the powers that be, claiming that their “indifference cost these men and women [the first responders] their most valuable commodity: time.”

“You should be ashamed of yourselves for not being here. Accountability appears to not be something that occurs in this chamber,” he added.

No matter what side of the aisle you happen to find yourself on, I think we can all agree with Jon Stewart that if anyone in this country deserves support, it’s these fine men and women.