If You Think This Josh Allen-Stefon Diggs Friendship Is Real, You’re A Sheep 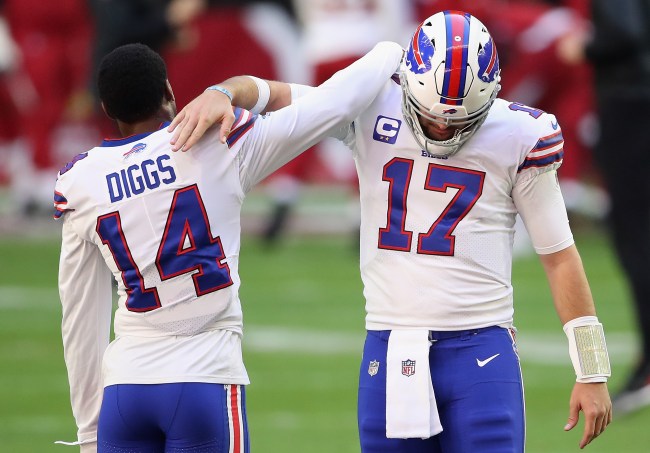 Tinfoil hat time! The theory: Josh Allen and Stefon Diggs don’t like each other as much as they, or the media, would like us to believe.

The “bromance” between Josh Allen and Stefon Diggs has been talked about a lot during the Bills’ incredible year. Their chemistry on the field would certainly suggest that these guys possess two halves of the same brain; that when one of them burns the roof of his mouth eating pizza, the other feels it in his mouth; that in the summer, they can be spotted churning the wheels of their tandem bicycle, bickering about which ice cream parlor to choose or whether Niagara Falls is more beautiful from the American or Canadian side.

But back in the day, I saw too many high school girls declare themselves “best friends,” showering each other with gifts and affection and showboating their newfound love for each other, only to have some minor disagreement/rumor bulldoze their entire house of friendship cards to the ground. Next thing you know, they hate each other to their cores, but the yearbook staff doesn’t catch on in time and names them “best duo” for senior superlatives, forcing them to take the world’s MOST UNCOMFORTABLE PICTURE TOGETHER (this happened at my high school, and we cherished it.)

My point is, friendships where the two parties remind people of their friendship all the time tend to be flimsy. Friendships where the two friends seem to be performing their friendship are one loose thread away from unraveling. And if you watch that clip, it feels like two traveling salesman are trying to sell me some miracle cure for webbed feet along the banks of some river in the South in 1885. It’s folksy and weird. The roughhousing, the apology for almost saying “ass,” the impish winks to camera… it’s a charade.

Put another way, it feels like these two are an early frontrunner for some season of America’s Got Talent. The producers caught on to their act in the audition process and told them they needed to lean in to the friendship angle in order to capture the hearts of America’s flyover states. The judges are going to ask them about their inseparable bond as Coldplay’s Fix You builds to a triumphant crescendo before Howard Stern Golden Buzzers them straight to the finals. Middle America loves it; the coasts see through it.

Not for nothing, it’s inherently uncomfortable for guys to answer the question: “Why do you guys connect so well?” Men become friends for all sorts of reasons. But male friendship is a delicate thing. It doesn’t like to be drawn out of its shell, to face the light of day and explain itself. Even so much as a whisper of its existence can cause it to scuttle away across the rocks. Don’t speak of these forces. Let them be, and grow, until they are sure of themselves.

Mark my words: if the Bills don’t win the superbowl, we’ll start to hear rumblings about how Josh Allen and Stefon Diggs really feel about each other. If they DO win, it won’t come out. I really don’t want to root against the Bills, but unfortunately, I prefer to watch the world burn.