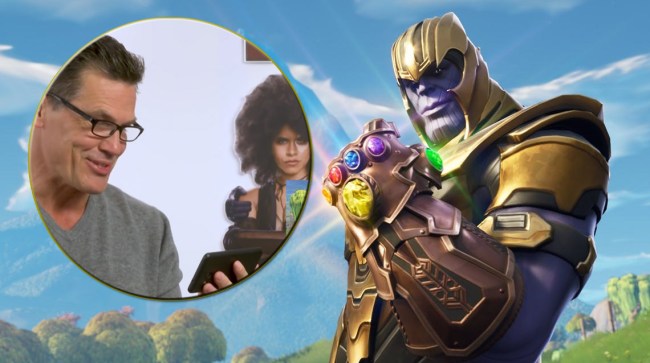 The reaction to the addition of Avengers: Infinity War character Thanos to the game taking over the world, Fortnite, has been a rousing success.

So when Josh Brolin sat down to talk about Cable and Deadpool 2 with IGN, they decided to show him what all the fuss was about. Brolin’s reactions to seeing Thanos dancing, flying and more in Fortnite were almost as entertaining as the game itself.

“So I’ve been seeing this Fortnite thing everywhere. Fortnite, Thanos and all that and I had no idea what anybody was talking about,” Brolin admitted.

Then, after seeing Thanos’ sweet dance moves, Brolin said, “I wish I did the mo-cap [motion-capture] for that.”

Also, previously we had heard from Brolin as to which comic book character he liked playing more, Thanos or Cable (find out here), and recently he told Flickering Myth more about what it is like to be in two blockbuster superhero movies both out in theaters at the same time.

You’re doing two comic book movies released so close together.You go into any multiplex right now and it’s you as Thanos and you as Cable on posters. Was there any trepidation about going back to comic book movies after Jonah Hex and the kicking that got, fairly or unfairly?

No, because that would be like saying “was it tough to go back into movies after you’d done a bad one?” period. Some movies don’t turn out. They just don’t and you can’t put too much onus on it. The only thing about Jonah Hex is that I don’t think that was a bad character and I got a lot of really good actors to be in that movie. It just didn’t work. We had the wrong director and we had a studio that put too much emphasis on changing it.

Ultimately, what I would like to do is go back and do Jonah Hex again in the way that I initially wanted to do it, as kind of a guerrilla $5-7m film – a Jason Blum film, that I think would be amazing. But, will I do it? Probably not.

Brolin also talked about how familiar he was with Deadpool before shooting the movie, the expectations for the two iconic roles and how he handled them, working with Ryan Reynolds, “creative swearing” and more.

At the moment, multiplexes are full of Josh Brolin posters. Maybe you’ll be in every film like some sort of Being John Malkovich situation!

I know! It feels that way doesn’t it. #ImSickOfBrolin! #EnoughOfBrolin!