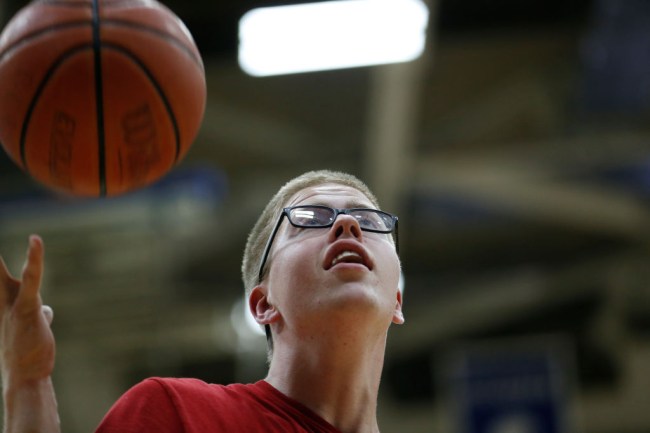 Over the years, Hollywood has perfected the art of making movies about sports where teams and athletes overcome impossible odds to make audiences all tingly inside, and if the film industry is searching for some more inspiration, they don’t have to look any further than the story of Josh Speidel.

Over five years ago, Speidel had made enough of a name for himself as a high school basketball player in Indiana that he’d received offers to take his game to the next level from a dozen schools before deciding to take his talents to the University of Vermont.

However, everything changed in an instant on the night of Super Bowl XLIX when Speidel was involved in a car accident and was rushed to a hospital in Indianapolis, where he was in a coma for five weeks and doctors warned his parents there was a good chance their son could be a shell of his former self when he emerged thanks to the brain damage he suffered.

However, Josh wasn’t having any of that nonsense.

Once he woke up, Speidel headed down a road to recovery that led to him ending up in Burlington for his freshman year in 2016, where he was welcomed with open arms by the team he’d committed to play for.

For the past four years, he’s been a member of the Catamounts but never reached a point where he was able to step onto the court on game day.

However, on Tuesday night, that all changed.

UVM’s contest against Albany was the team’s last home game of the regular season and graduating students were honored during the Senior Night ceremonies—including Speidel, who finally got a chance to suit up and play in his first college basketball game.

Josh Speidel set to make his @UVMmbb debut 5 years after a devastating accident that nearly took his life.

Full coverage from senior night between the Cats and Albany tonight on @Wcax pic.twitter.com/zBRYIq7xmU

This is so GREAT to see. 👏👏 5 years after a car crash that almost killed him &caused a significant brain injury, Josh Speidel makes his Division I debut last night for Vermont. His first and only made basket in his college career pic.twitter.com/hgCF3JX3fe

Prior to the game, both teams made an arrangement to give Speidel the special moment he truly deserved when they traded layups and allowed him to end his career with two points and a 100% shooting percentage.