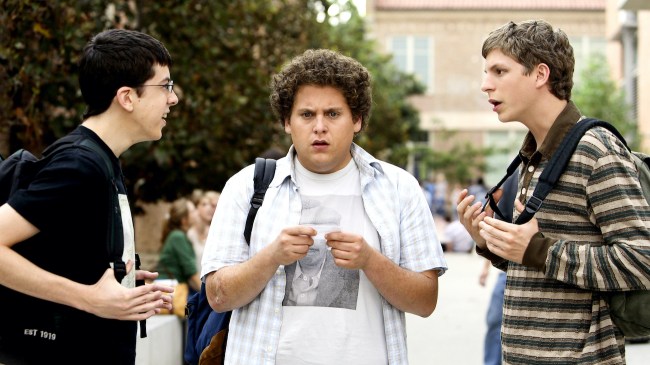 During a recent interview on a podcast, director and producer Judd Apatow revealed that he does, in fact, have plans for a potential sequel to Superbad should the project ever come to be.

According to Apatow’s anecdote, who most recently directed the poorly-review Netflix comedy The Bubble, said that the plot would involve Jonah Hill’s Seth visiting Michael Cera’s Eva at college.

“I know that Jonah said, ‘Oh it’ll be funny to do it when we’re 70 or 80,’ but I really wanted them to do a Superbad in college where Jonah flunks out of college and just shows up and visits Michael Cera at college.”

Apatow continued, “But everyone was like ‘Nah we don’t want to screw up ‘Superbad’ by accidentally making a crappy second one,’ and I would always say the same thing, ‘Well that’s like saying don’t make the second episode of the ‘The Sopranos.’ Like, so why do you think we would screw up the second one?’” [via Inside of You with Michael Rosenbaum]

Earlier this year, we wrote about Jonah Hill’s plans for a Superbad sequel, as the actor and director said that he’d be interested in making the film once the cast was elderly.

Unfortunately, despite the vague interest from both the film’s star and its producer, a sequel to Superbad feels increasingly unlikely.

RELATED: This Is The One Condition Jonah Hill Has For Making A ‘Superbad’ Sequel