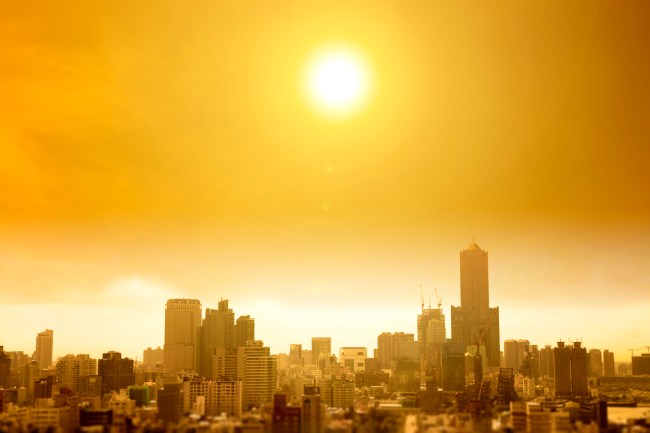 We are less than two weeks into Summer and we’ve already reached that point where I need to shower three times a day and change shirts every time I go outside. The ‘feels like’ temperature was in the 90s last night when I was walking my dog at 10:30 pm.

This isn’t all that insane considering I live down in Florida and throughout most of the Summer have to keep a spare shirt in my car just because of how suffocatingly swampy the weather gets. But the heat is coming for the rest of you, at least according to the latest predictions from meteorologists.

The experts are predicting ‘potentially historic’ across two-thirds of the country this month with the Great Lakes getting hit the hardest by temperatures 15-degrees above normal and the Northeast getting crushed with 90-degree temps, much like the insufferably hot summers of 2011 and 2012.

Heads up on a potentially historic heat wave for, *checks notes*… THE EASTERN TWO THIRDS OF THE COUNTRY https://t.co/lDaBDWEeax

The forecast from the Washington Post paints a grim weather picture of the month ahead and this doesn’t even take into consideration that we’re currently dealing with hurricane season down South.

Widespread above-average temperatures and at times stifling humidity are expected over the majority of the central and eastern Lower 48, with near-normal temperatures over the West and the Southeast. The National Weather Service Climate Prediction Center is already calling for a moderate risk of excessive heat in many areas by next week.

“After a relatively warm June, we are expecting July to be unusually hot, with the most anomalous warmth focused in the north-central states and Great Lakes region,” Todd Crawford, chief meteorologist at the Weather Co., wrote in an email.

Crawford said the weather pattern could support “potentially historic heat,” similar to the sweltering levels in July 2011 and July 2012, which ranked as the fourth-warmest and warmest on record in the contiguous United States. (via)

There’s talk of a ‘ring of fire’ which causes extreme temperatures and thunderstorm conditions are expected throughout the Great Lakes States and the Northern Plains. This same pattern is expected to delay the normal ‘monsoon’ season in the desert states which would only exacerbate the wildfire concerns.

Average temperatures are expected to be up anywhere from 5 to 15 degrees from the Great Lakes to the East Coast with the Lakes states getting hit the hardest while the Northeast will still get pummeled with warm weather.

Highs in Washington, Philadelphia and Baltimore could be in the 90s late this week. By early next week, a few 90s might even make it into the Connecticut River Valley in southern New England. Farther east, a couple of “backdoor cold fronts” could bring some local cooling to parts of the shoreline during this time frame. (via)

Limited rainfall and above-normal temperatures forecast for the Southern and Central Plains lead to likely #drought expansion in July. Emergence of drought is also anticipated in parts the Southwest with a delayed monsoon onset in the forecast.https://t.co/9pT87CSQMB pic.twitter.com/mX4GIvzzvA

Our final outlook for July 2020 sees increased chances for above-normal temperatures across much of the country. Below-normal rains are favored for the Four Corners and parts of the Central and Southern Plains. https://t.co/JI2DUvhln5 pic.twitter.com/Z5Rav41NSV

I typically think of August and September as the hottest months of the year but I’m now trying to mentally prepare myself to stay indoors for pretty much all of July as well.

Such a fun and exciting time to be alive right now, isn’t it?