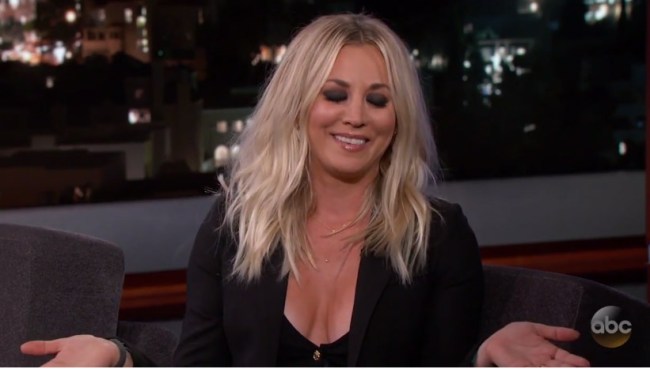 Listen, we loathe The Big Bang Theory as much as anyone (well, except for maybe this guy), but we love one of its stars Kaley Cuoco. It’s hard to reconcile in our minds, but we’ve somehow managed thus far.

We just can’t help it. Anytime she appears on our TV screens or computer monitors we’re just drawn to her. Is it her good looks? Sure. Is it her sense of humor? Definitely. Is it her seemingly complete lack of inhibitions and honesty? No doubt about it. It’s all of those things and more.

So when she appears on late night talk shows like she did Thursday night on Jimmy Kimmel Live that’s some automatic must-watch TV. As usual, Cuoco did not disappoint, sharing some very funny stories about her life, told only as she can.

Her first story involves an awkward encounter she had when she was stopped by TSA at the airport and got busted for having not one, but TWO wine openers in her carry-on luggage.

Her excuse? “Here’s the thing. I just like alcohol and, apparently, I needed to be very prepared.” Is it any wonder we’re such big fans?

Cuoco’s second story involves a photo of a giant swing she has INSIDE her house. Not only does she make a tremendous case for doing such a thing she also explained what her interior designer said when she told him she wanted it. Guess what he thought she meant when she said she wanted a swing in her house?

Her third discussion was about her show The Big Bang Theory. You’re welcome to skip it, but she basically just discussed returning after all the speculation that the show was done and also talked about some of the gifts that the cast buys for their crew during the holidays. That part was actually pretty good.

Here’s some bonus pics she shared on Instagram of her visit with Jimmy Kimmel Thursday night.