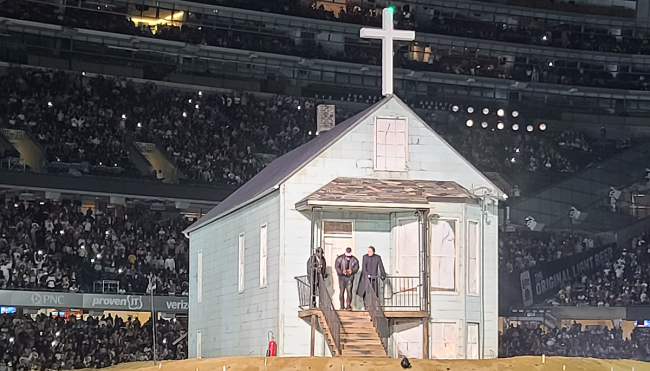 After Kanye West failed to live up to his pledge to release the long-awaited Donda following the elaborate listening party he hosted in Atlanta earlier this month, fans finally got their first chance to listen to the album after it surfaced a few days after he orchestrated a similarly absurd spectacle in Chicago last week.

The Artist Who May Soon Be Formerly Known As Kanye West claimed Universal dropped Donda without his permission after it suddenly appeared on streaming platforms on Sunday, so while he may have been less than thrilled with its release, the fact that was released at all might be the most surprising aspect of the entire rollout—which is saying something when you consider the event he held at Soldier Field featured a replica of his childhood home erected in the middle of the stadium.

However, according to The Chicago Sun-Times, the construction of that facsimile was actually a backup plan Kanye was forced to settle for after he was denied the chance to realize his original vision: physically transporting the actual house where he grew up from 7815 S. South Shore Drive to the concert venue.

The outlet reports the city’s Buildings Department failed to receive any requests for the multiple permits that would’ve been needed to relocate the dwelling, which is located around 8.5 miles away from Soldier Field. It also didn’t receive any of the structural engineering reports it requires and noted the house—which West purchased last year—was already in its system as a candidate for demolition.

It doesn’t get more Kanye than that.